Posted on Wednesday, Apr 20 2016 @ 13:37 CEST by Thomas De Maesschalck
Cooler Master rolled out its new line of MasterLiquid Pro 120 and MasterLiquid Pro 240 watercooling units. These models feature a couple of interesting design changes versus the company's Nepton watercoolers, including the adoption of a new dual-chamber cooling design.

The new design promises not only higher longevity but also enhanced performance. It works by moving the critical components of the pump into a separate upper chamber so they're no longer exposed to hot liquid. The pump moves coolant to a lower chamber, where cooling fluid is "sprayed" on the center of the water block:

The pump moves coolant from its upper chamber into a lower chamber, where it's "sprayed" on the center of the water block. Cooler Master claims this design offers superior performance compared to water blocks where coolant is pumped in at one end of the cold plate before passing over the entire water block. That design is purportedly susceptible to reductions in flow rate as the coolant moves across the dense fin array on top of the plate. The company says that its "spray-down" design also lets it pack more fins on top of the cold plate to increase the fin surface area and potentially improve performance.

It will be interesting to see reviews on how this performs but I suppose the Asetek watercooling patent case was one of the prime reasons Cooler Master came up with this new design.

Other improvements include the use of a more silent driver in the pump as well as a radiator with a rectangular fin design, which promises better performance by increasing the fin surface area and lowering resistance to airflow. Furthermore, the MasterLiquid Pro also feature new MasterFan Pro Air Balance 120mm high-static-pressure fans, which use silent driver technology similar to that of the motor found in the watercooling pump. 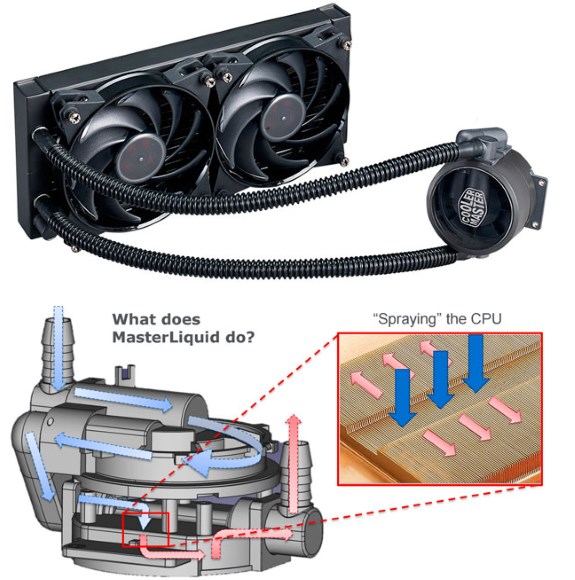