A leaked slide of AMD's graphics roadmap ended up in the hands of VideoCardz. We can't verify the accuracy but it doesn't seem to be out-of-touch with the official narrative and the latest round of rumors.

This year we're going to see the launch of the Polaris architecture, which features Polaris 10 for the high-end and Polaris 11 for the more mainstream and below cards. Made on a 14nm process, these cards will feature a GCN 4th generation architecture, support for HEVC encoding/decoding, HDMI 2.0 and DisplayPort 1.3.

It seems Polaris 10 will be used for the R9 490 and R9 480 series, but it's unclear whether the Fury series will disappear entirely. Anyway, what we do know now is that AMD isn't planning to launch HBM2 cards in 2016.

The previous AMD roadmap from the Capsaicin event implied a Vega launch around the end of the year or early 2017 but this new slide clearly puts Vega in the 2017 timeframe. Other than that Vega will be the first architecture to support HBM2 we do not know much about it.

The 2018 Navi architecture is also mentioned on the slide but that architecture is even more mysterious. All we know is that it will focus on "scalability", which could mean a greater focus on using more smaller cores in multi-GPU configurations rather than big monolithic designs, as well as support for an unnamed NextGen memory technology. 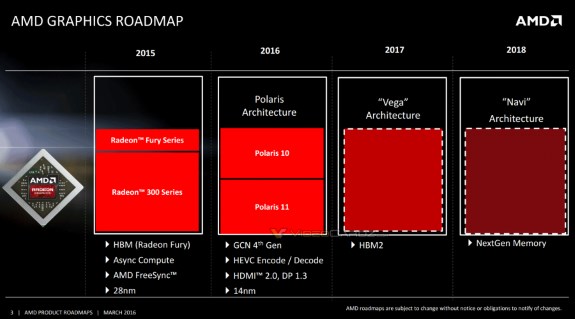