AMD Project Quantum may be a go with Zen and Vega

Posted on Monday, Apr 25 2016 @ 12:42 CEST by Thomas De Maesschalck
Almost a year ago AMD showed off its Project Quantum, this was to be a compact but powerful gaming system with an Intel Core i7 processor and the dual-GPU Fiji card. We haven't heard about Project Quantum for quite some time now but now rumors are flying around that AMD may greenlight the project in the future when its Zen processors and the next-gen Vega GPU architecture with HBM2 are available.

It is thought that an upcoming Project Quantum would contain the following core components; an AMD Zen CPU, and a next-gen Vega GPU with HBM2. Looking at AMD roadmaps a retail ready Project Quantum will therefore be quite a few months away from being realised – yet it remains an exciting project. It could indeed be a great ready-made system for 4K and VR pursuits or as a reference design to drive new form factors. 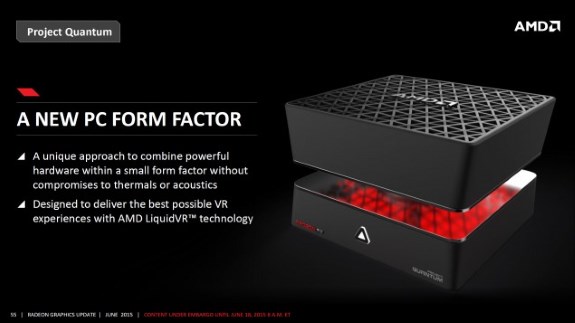