Posted on Monday, Apr 25 2016 @ 13:23 CEST by Thomas De Maesschalck
WCCF Tech published some photos of AMD's upcoming Radeon Pro Duo video card. One of the cool things we didn't know before is that the Radeon Pro Duo comes with a third Fiji GPU inside the package! This is a real GPU that likely didn't make it through quality assurance, AMD includes it as a souvenir so Radeon Pro Duo users can get a glimpse of what powers the card. Definitely a very nice treat from AMD.

In the last article, we reported that the Radeon Pro Duo comes with a third Fiji GPU inside the package. The Fiji chip is in fact a real chip and not a dummy. The chip is packed to show the significance of the Fiji GPU which is not only the GPU powering the Radeon Pro Duo but the first graphics card to feature HBM memory on a special interposer that forms a Multi-Chip package. The only thing close to the Fiji GPU in terms of technology used and design is NVIDIA’s Pascal GP100 GPU which was unveiled at GTC 2016 and will start shipping to supercomputers in June. 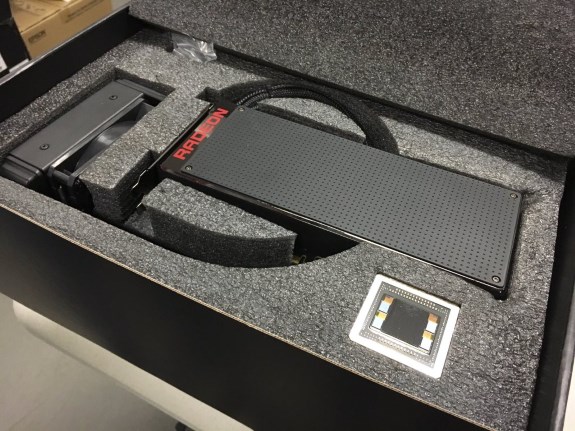