For a suggested retail price of only $99.99 in the U.S., the Logitech Cordless Desktop MX 3000 Laser provides all the benefits of a cords-free experience without any hassle. The new Logitech SecureConnect wireless technology ensures a plug-and-play setup and enhanced security. Logitech's smart power management system helps the mouse achieve a battery life of up to six months, while the keyboard can last up to 18 months on a pair of AA batteries. Both the mouse and the keyboard have built-in battery indicator lights, providing approximately 10 days' notice when power is getting low. The mouse also features an on/off switch to help extend battery life even further.

The nearly singular wavelength of laser light is capable of revealing much greater surface detail than the red LED found in most of today's optical mice. Hence, the laser can track reliably even on tricky polished or wood-grain surfaces. The mouse's laser light is virtually invisible to the human eye -- and very safe. As the laser mouse is moved, the sensor sees minute changes in the surface detail, which are translated into cursor motion on screen. The laser mouse delivers pixel-precision navigation, which is particularly important for applications such as photo editing or gaming.

The Logitech Cordless Desktop MX 3000 Laser keyboard features ergonomic characteristics that help make the digital experience more comfortable without changing the way people work. The keyboard has a low profile -- it is 22.3 mm in height when placed on a flat surface. The keyboard also incorporates Logitech Zero Degree Tilt keyboard design, which means the rows of keys are all the same height. According to independent studies, the ergonomic benefit of a low-profile keyboard without any slope is that it may help minimize wrist extension. Repetitive wrist extension can be a cause of hand and forearm discomfort. 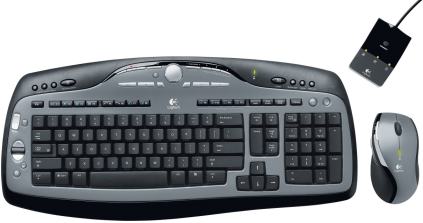 While the keyboard is thinner, the distance the keys can be pushed down is the same as with many other keyboards, so that the feel of typing is familiar. Logitech also has placed great emphasis on the tension, or activation force, of the keys, delivering a smooth, comfortable typing experience without requiring excessive effort.

With Logitech's new SecureConnect technology, the cordless keyboard, mouse, and receiver are all pre-synchronized and pre-connected during manufacturing; encryption is also completely pre-configured. All three components are ready to go right out of the box, with a secure link and without the hassle of a manual connection process. Even following a battery change, there is no reconnection process.

The Logitech Cordless Desktop MX 3000 Laser mouse and keyboard are designed for two-handed navigation with useful controls on the keyboard and the mouse to make using a computer more convenient, more efficient, and more comfortable. The keyboard includes a media panel with a full complement of controls that can be used with most popular media players, as well as audio preset buttons that can be tied to favorite Internet radio stations. Both the mouse and the keyboard feature controls to enable horizontal and vertical scrolling. They also include controls to zoom in and out of documents, so that people can easily move in to touch up a digital photo or perfect a presentation slide, or back out to view an entire document layout.

Each of the keyboard's 12 F-Keys have a second mode in which they can be programmed for commonly used actions such as: launching applications, saving documents, or opening preferred Web pages. The F9 through F12 keys are smart keys that can be programmed simply by pressing and holding them while in the desired application, folder, Web page, online radio station, or music play list. All of the F-keys can be programmed by using the included Logitech SetPoint software.

The Logitech Cordless Desktop MX 3000 Laser will be available beginning this month in Europe and the U.S.