I'm often a bit hesitant to post leaks like these but I know a lot of you are very hungry for the latest leaks so here it is. ChipHell published a table with what it claims are the specifications of NVIDIA's future high-end cards.

If the rumor pans out, NVIDIA will use the GP102 for its next-gen GeForce GTX Titan as well as for the GeForce GTX 1080 Ti. This is believed to be a 478mm² chip and the Titan variant allegedly has 3840 CUDA cores, 240 TMUs, 96 ROPs, a 1507MHz core clockspeed, 1621MHz Boost and a whopping 24GB GDDR5X memory clocked at 10-12GHz. The card requires 6+8-pin power delivery and has a 250W TDP. The leaker claims the GeForce GTX 1080 Ti will be very similar to the Titan, but with half the memory and 10 percent of the CUDA cores disabled.

That's more SPs than Nvidia puts on the GP100 chip that drives the Tesla P100, but it appears a GP102 Titan will maintain the same 1/32 FP64 throughput as the GM200 chip in the Titan X. We're guessing GP102 will omit dedicated FP64 hardware as part of its slimming-down compared to the enormous 610-mm² GP100 die.

ChipHell also confirms the earlier rumor about the GeForce GTX 1060 being based on the same GP104 GPU as the GeForce GTX 1070/1080 but the table indicates the GTX 1060 may have just 1280 CUDA cores, exactly half of the GeForce GTX 1080. This sparks some concerns about yields as it's strange to cut down a high-end chip so much to serve as a mainstream/performance card. 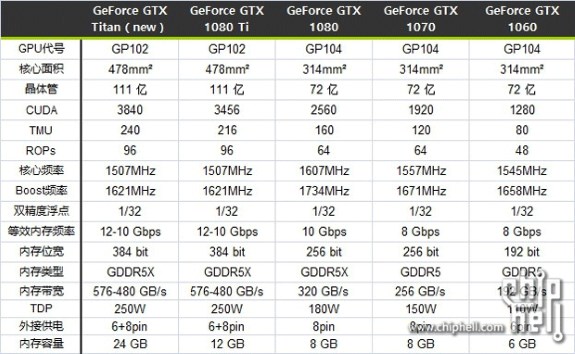