Posted on Tuesday, May 24 2016 @ 18:18 CEST by Thomas De Maesschalck
As I wrote a couple of days ago, Toshiba decided to no longer market its OCZ brand as a standalone entity. Future products will be launched under the new Toshiba OCZ brand, as is the case with today's arrival of the Toshiba OCZ RD400 SSD series.

This product was previously known as the RevoDrive 400, it's the first Toshiba NVMe M.2 SSD for the consumer market, it uses four PCIe lanes and it ships in capacities from 128GB to up to 1024GB. Consumers will be able to buy it as a standalone M.2 module or with a PCIe adaptor card.

The pricing is still unknown.

Unlike Serial Advanced Technology Attachment (SATA) based SSDs utilizing the legacy Advanced Host Controller Interface (AHCI) protocol, NVMe is the first storage protocol designed with SSDs in mind making the RD400 series one of Toshiba’s fastest consumer SSDs to date. Additionally, the RD400’s PCIe Gen3 x4 lane interface shatters the traditional SATA bottleneck by delivering over four times the performance of SATA SSDs[4]. The RD400 series features sequential read/write speeds of up to 2,600 MB/s and 1,600 MB/s and random read/write performance of up to 210,000 and 140,000 4KiB[5] input/output operations per second (IOPS) [6].

The RD400 series is targeted at both desktop and notebook users, but the compact M.2 2280 form factor enables ultra-thin notebooks[7] to take advantage of PCIe speeds. Desktop users can still harness the power of the RD400 even if they don’t have an M.2 slot by purchasing the PCIe adaptor card version. Both models will be available in capacities of 128GB, 256GB, 512GB, and 1024GB[8].

RD400 SSDs feature Toshiba 15nm MLC NAND flash memory and an endurance rating of up to 592TBW[9]. Each drive is backed by a 5-year advanced warranty program[10] that strives to minimize the aggravation surrounding traditional support and warranty claims. 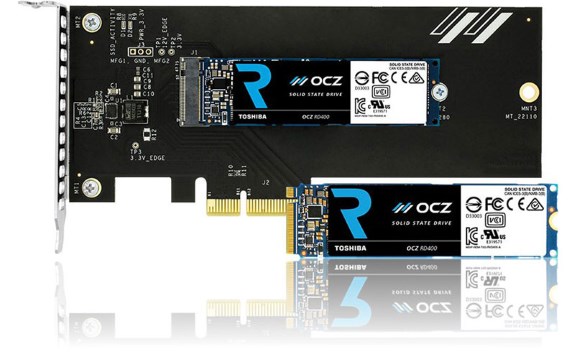