AMD regained GPU marketshare in Q1 2016, still has only 22.8 percent of market

Posted on Wednesday, May 25 2016 @ 15:17 CEST by Thomas De Maesschalck
The latest discrete graphics card report from Jon Peddie research states AMD gained a bit of marketshare. AMD's marketshare is still far below what it used to be a couple of years ago but the important thing here is that it's no longer declining. AMD's marketshare stood at 22.8 percent in Q1 2016, which is 1.7 percent more than the quarter before but just 0.3 percentage points more than the same quarter a year ago. NVIDIA on the other hand still reigns supreme with 77.2 percent of the market.

Jon Peddie found that total add-in board sales were up 4.8 percent quarter-over-quarter and 5.8 percent year-to-year. The publicly available version of the report also contains a pretty interesting graph that tracks shipments by segment over time. High-end video card sales have done well recently, whereas mainstream video card sales are struggling as non-gaming machines no longer need a discrete video card. 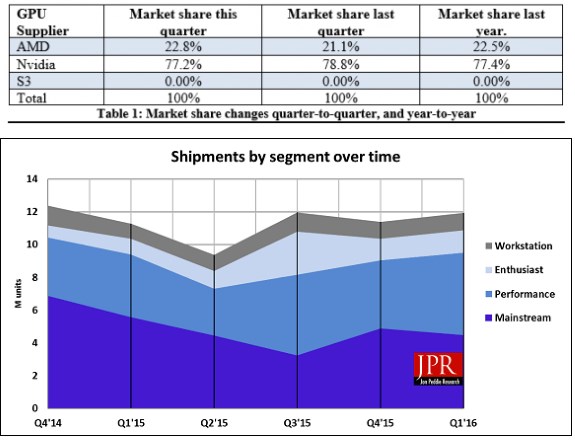 Market share shifts. The market shares for the desktop discrete GPU suppliers shifted in the quarter too.

JPR’s AIB Report tracks computer add-in graphics boards, which carry discrete graphics chips (GPUs). AIBs used in desktop PCs, workstations, servers, and other devices such as scientific instruments. They are sold directly to customers as aftermarket products, or are factory installed. In all cases, AIBs represent the higher end of the graphics industry using discrete chips and private high-speed memory, as compared to the integrated GPUs in CPUs that share slower system memory.

The PC add-in board (AIB) market now has just three chip (GPU) suppliers, which also build and sell AIBs. The primary suppliers of GPUs are AMD and Nvidia. There are 48 AIB suppliers, the AIB OEM customers of the GPU suppliers, which they call “partners.”

Lots of AIB suppliers, smaller shipments. In addition to privately branded AIBs offered worldwide, about a dozen PC suppliers offer AIBs as part of a system, and/or as an option, and some that offer AIBs as separate aftermarket products. We have been tracking AIB shipments quarterly since 1987—the volume of those boards peaked in 1999, reaching 114 million units, in 2015, 44 million shipped.

The news for the quarter was encouraging and seasonally understandable, quarter-to-quarter, the AIB market increased 4.8% (compared to the desktop PC market, which decreased -10.5%).

Gaming the game changer. However, in spite of the overall PC churn, somewhat due to tablets and embedded graphics, the PC gaming momentum continues to build and is the bright spot in the AIB market. The gaming PC (system) market is as vibrant as the stand alone AIB market. All OEMs are investing in Gaming space because demand for Gaming PCs is robust. Intel also validated this on their earnings call., and the recent announcement of a new Enthusiast CPU. However, it won’t show in the overall market numbers, because like gaming GPUs, the gaming PCs are dwarfed by the general-purpose machines.

The overall GPU shipments (integrated and discrete) is greater than desktop PC shipments due double-attach—the adding of a second (or third) AIB to a system with integrated processor graphics—and to a lesser extent, dual AIBs in performance desktop machines using either AMD’s Crossfire or Nvidia’s SLI technology.

Improved attach rate. The attach rate of AIBs to desktop PCs has declined from a high of 63% in Q1 2008 to 44% this quarter an increase of 17.1% from last quarter which was pretty good. Compared to this quarter last year it increased 23.9% which was outstanding.

Extended buy-cycle. With lack luster applications (other than games), and the failure of Windows 10 to spur the market, consumers for the most part, and commercial buyers extended their buying cycle out from three to four or more years. They still need and use PCs, but not the latest ones. The exception, and only bright spots, have been the gaming segment and professional graphics. As a result, we see consumers buying AIBs to gain performance improvements and not upgrading the PC as frequently.