Posted on Monday, May 30 2016 @ 17:31 CEST by Thomas De Maesschalck
At a Computex press conference, ARM presented its upcoming Cortex-A73 architecture with the Mali G71 GPU. The chip designer says the new generation of SoCs based on this architecture is designed with virtual and augmented reality applications in mind. When made on a 10nm process, it promises up to 30 percent higher performance, up to 30 percent higher energy efficiency and a smaller footprint. Full details about what's new can be found at ARS Technica.

ARM says that A73 will improve performance by 30 percent while “increasing power efficiency” by 30 percent. Some of that speed increase comes from a clock speed bump—ARM’s figures compare a Cortex A72 running at 2.5GHz to an A73 running at 2.8GHz—while the rest comes from architectural improvements. And at least some of that power efficiency will rely on new 10nm processes from the likes of Samsung and TSMC; today’s chips are being made on 14nm or 16nm processes.

10nm parts should be ready to ship by early 2017, when ARM says A73 will begin to show up in consumer devices, but we may see some A73 SoCs built on the more mature 14nm or 16nm processes. Beware of that when it comes time to measure A73’s performance in the real world. 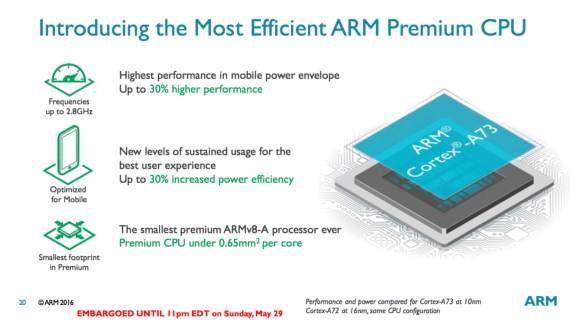