Posted on Saturday, Jul 02 2016 @ 18:52 CEST by Thomas De Maesschalck
A bunch of slides with details of NVIDIA's GeForce GTX 1060 leaked. We still know relatively little about this card, it seems NVIDIA managed to keep a lid on leaks until almost the very last moment. If recent rumors are correct, the card was originally scheduled for August but NVIDIA decided to bring forward the launch of the GTX 1060 to July to turn up the screws on AMD's Radeon RX 480.

The rumored launch date is July 7th and VideoCardz got its hands on the very first specifications of the GeForce GTX 1060. As you may know, this card features a GP106 "Pascal" GPU made on a 16nm FinFET process.

Design-wise the cooler of the GTX 1060 reference design looks like its bigger brothers. Under the hood are reportedly 1280 CUDA cores and a TMU count of 80. The base clockspeed is still unknown but the boost clockspeed should be 1.7GHz.

The GeForce GTX 1060 comes with 6GB GDDR5 memory clocked at 8000MHz, it has a 192-bit memory bus and memory bandwidth of 192GB/s. The memory clockspeed is the same as the AMD Radeon RX 480 reference cards, which are available in 4GB and 8GB capacities for $199 and $239, respectively.

NVIDIA rates the GeForce GTX 1060 at a TDP of 120W, which is 30W less than the official TDP of the Radeon RX 480. The card is equipped with a 6-pin PCIe power connector and has not only three DisplayPort 1.4 outputs and one HDMI 2.0b output, but also a DL-DVI output.

Pricing remains the big mystery of course. Anyone want to make a guess how much it will cost? 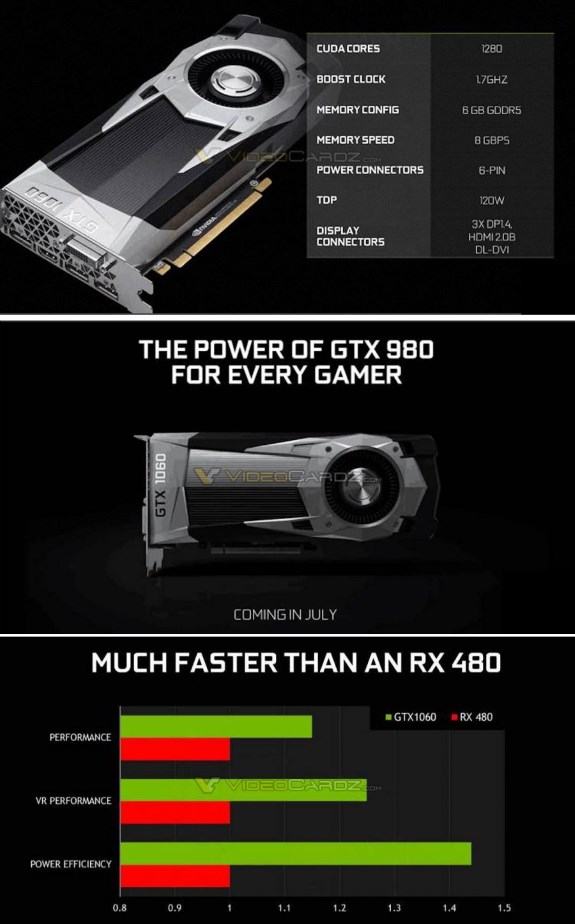