NVIDIA keeps blowing it out of the park with big increases in both revenue and net income. For its fiscal Q2 2017, the GPU designer pulled in record revenue of $1.428 billion, up 24 percent year-over-year, and net income of $253 million, up 873 percent versus the year before.

Adjusted for what the company identifies as one-time items, NVIDIA earned $313 million last quarter, up 65 percent year-over-year, which results in earnings per share of 53 cents, up 56 percent versus last year. The company managed to beat analysts estimates, revenue was $80 million higher than consensus and earnings per share was 16 cents higher.

Next quarter, NVIDIA expects to pull in net sales of $1.68 billion, plus or minus two percent. NVIDIA attributes the good results to strong demand for Pascal-based GPUs and soaring sales of products for deep learning applications. 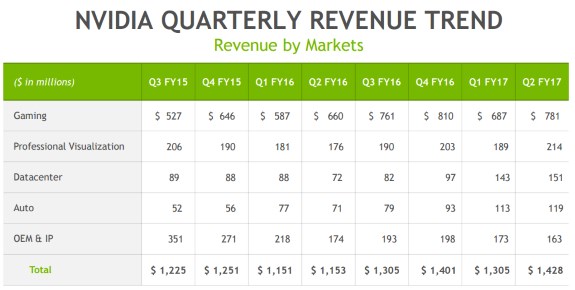 It is no surprise that NVIDIA's shares are trading at an all-time high in after-hours trading, the stock is currently up 3.13 percent to $61.57. NVIDIA shares have soared 159.79 percent over the last year.

"We are more excited than ever about the impact of deep learning and AI, which will touch every industry and market. We have made significant investments over the past five years to evolve our entire GPU computing stack for deep learning. Now, we are well positioned to partner with researchers and developers all over the world to democratize this powerful technology and invent its future," he said.

Capital Return
During the first half of fiscal 2017, NVIDIA paid $509 million in share repurchases and $124 million in cash dividends.

NVIDIA's outlook for the third quarter of fiscal 2017 is as follows: