Posted on Saturday, Aug 13 2016 @ 14:30 CEST by Thomas De Maesschalck
It's been a while since we've heard something about the 3GB version of the GeForce GTX 1060 but it seems last month's rumors about this model having fewer CUDA cores were correct. VideoCardz received photos from a special event in Asia, which show a slide that confirms the GTX 1060 3GB will have 1152 CUDA cores, versus 1280 for the 6GB edition. The other specifications are identical.

This is without a doubt a very strange decision for NVIDIA to launch two products using the same model name, but having different GPU configurations. Rather than naming one GTX 1060 Ti or Boost, we now have two GTX 1060 cards with different frame buffer and different CUDA core count.

We don't know the launch date or pricing, but NVIDIA will likely use this model to turn up the heat on AMD. 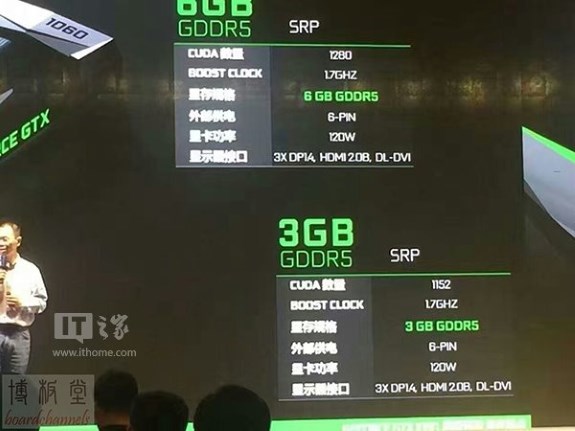