PCI Express 4.0 will also have a power ceiling of at least 300W

Posted on Monday, Aug 22 2016 @ 13:30 CEST by Thomas De Maesschalck
UPDATE: PCI-SIG confirmed our suspicions, an error was made during the interview. PCIe 4.0 will NOT offer more than 75W via the motherboard slot. Therefore, you can ignore everything written below this line.

A couple of days ago I wrote about a slide from the Intel Developer Forum that reveals the plan to introduce PCI Express 4.0 in 2017. Not a lot of details were known but the slide revealed the new specification would double the bandwidth to 16GT/s.

Tom's Hardware sat down with Richard Solomon, vice president of PCI-SIG, and learned a couple of extra details. Beside a big increase in bandwidth, the new PCI Express standard will also for the first time deliver a massive power increase at the connector.

When we asked the PCI-SIG, we received the news that for the first time, PCIe will get a massive power increase at the connector. Solomon couldn't recall the exact ceiling because member companies have proposed several options. Solomon stated that the minimum would be 300W, but the ceiling “may be 400 or 500W."

Even with the minimum 300 watts, there is more than enough power provided by the edge connector to run a GeForce GTX 1080 (reference design 180 watts) and Titan X (250 watts) without an external power source. PCI Express 3.0 provides a maximum of 75 watts thus far, though many slots support the default 25W. The rating for a x16 lane card comes from 3 amps at 3.3 volts and 5.5 amps at 12 volts, which is a rating that dates back to the introduction of PCI Express 1.0a in 2003.

The reason why Tom's Hardware brought up power delivery is because they spotted a weird AMD Naples server motherboard with four 8-pin and two 6-pin power connectors. There are not a lot of details, so I don't know what exactly they have in mind here. The suggestion here seems to be you'll be able to plug a high-end card in a PCIe 4.0 slot without having to plug a PCIe power connector into the card.

Instead, you'll plug the connector into the motherboard, which will then have to deliver the power to the card via the PCB traces on the motherboard to the PCIe slot. What the benefit is in this scenario is a bit of a mystery as it threatens to make motherboards more complex and expensive. Guess we'll have to wait a bit longer for a more detailed explanation. 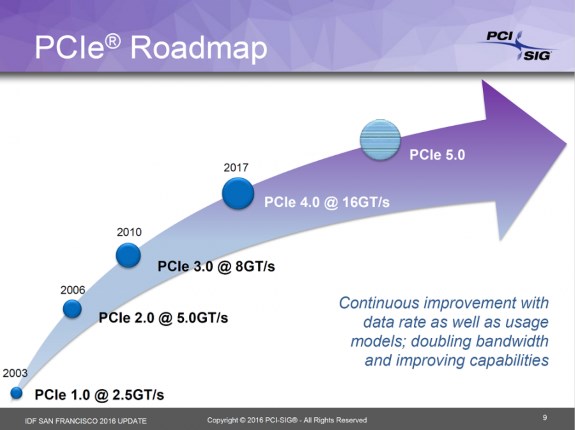