A report from NotebookCheck reveals Intel plans to launch its mobile ultra-low-voltage (ULV) Kaby Lake processors in Q2 2017. For the first time, the ULV lineup will include quad-core processors with a 15W TDP.

With Skylake, Intel currently has its mobile processors separated into four categories – “Y”-series (Core M) for 2-in-1 notebooks, “U”-series for thin and light notebooks, “H”-series for gaming notebooks (with unlocked “HK” and “HQ” quad-core variants). The lineup includes some chips with Intel HD Graphics (listed as “+ 2” for “Tier 2”), while others feature upgraded Intel Iris Graphics (listed as “+ 3e” for “Tier 3”).

The slide also reveals there will be a new low-power chip for gaming laptops; a quad-core H-series part with a TDP of only 18W. 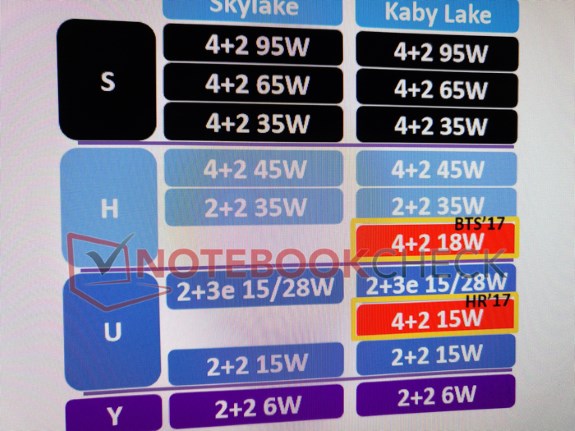