UPDATE: August 24, 2016 @ 22:57
Marty McFly posted an update on his Facebook page, explaining he sorted out the issue with NVIDIA:

[EDIT] Update and conclusion on the Ansel thing: I talked with some guys from Nvidia and especially the lead developer of Ansel, it's all sorted out. It was a result of some testing, basically leftover code; the next Ansel update will have some code removed and me credited, so it's all fine now. I have seen that someone posted this on reddit, probably in an attempt to start a shitstorm or something, don't do that. It's not a big thing really and Ansel is no commercial product so case closed then =)

Game modder Marty McFly Modding took a look at NVIDIA's Ansel source code and was shocked to discover that some of the post-processing tools of Ansel contain code written by him.

Without authorization or giving credit, NVIDIA software developers apparently stole some of the postprocess shaders Marty McFly wrote for the MasterEffect shadersuite.

Marty McFly writes the colormod pass code of Ansel's custom.fx is an almost ad verbatim copy of his MasterEffect code, NVIDIA's developers did not even bother to change variable names and comments.

On his Facebook page, he explains everyone can check for themselves, by opening the C:/Program Files/NVIDIA Corporation/Ansel/ShaderMod folder and searching the files for variable names like ReShade.fx or MasterEffect. 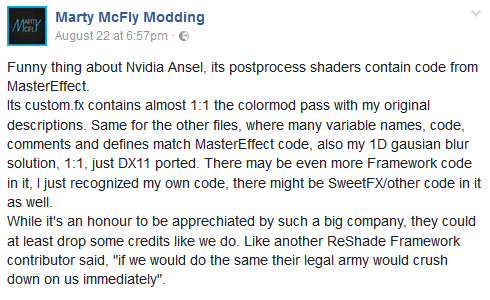