Posted on Friday, Aug 26 2016 @ 15:03 CEST by Thomas De Maesschalck
Gearbox Software is reportedly going to launch a remastered edition of Duke Nukem 3D to celebrate the game's 20th anniversary. While not officially confirmed yet, a countdown timer on the Duke Nukem website confirms something will be announced on September 1st. It's definitely going to be a late anniversary party as Duke Nukem 3D saw its first release on January 29, 1996.

After Duke Nukem developer 3D Realms went bust, Gearbox acquired the rights to the Duke Nukem franchise and tried to polish up Duke Nukem Forever. After spending 15 years in development hell, Duke Nukem Forever saw the light of day in 2011 but most media gave it very poor reviews.

Now a rumor claims Gearbox is going to try to make some money with a re-release of the 20-year old Duke Nukem 3D. To be named Duke Nukem 3D: World Tour, this remastered edition will reportedly offer a lot of new content and perhaps even a new co-op or deathmatch online mode - but nothing is confirmed yet.

Some screenshots can be found over here but overall it looks like they put in minimal effort in remastering this classic game. 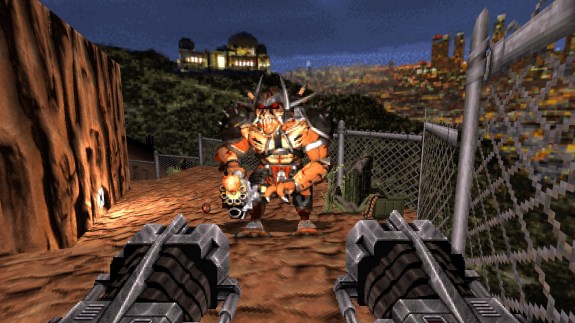