Ever since solid state disks started conquering the computer storage market, about the only big negative versus hard disk drives has always been the price per gigabyte. Big improvements have been made in the cost level of SSDs, but if you need a lot of storage capacity they're still quite expensive.

At the moment, a 1TB HDD costs around 4 cents per gigabyte, whereas SSDs typically cost anywhere from 20 to 50 cents per gigabyte, depending on capacity, NAND type, and form factor. Samsung expects the gap will become a lot smaller over the next couple of years and predicts that by 2020, it will be able to offer a 512GB SSD for the same price as a 1TB HDD today.

So basically, Samsung is saying that a 512GB SSD will cost under $50. The key to hitting these levels will be to scale up the 3D NAND production and layer density. At the moment, the densest Samsung NAND flash memory features 48-layers and to achieve the predicted 2020 cost level, the company will need to hit 64 or 96-layers:

Conventional planar NAND shrank the space between the cells with each generation. V-NAND focuses on scaling upwards by adding new layers rather than taking up less space per layer. While this currently offers better scaling characteristics and longevity than 2D NAND, it’s by no means easy. Samsung initially debuted 32-layer NAND and announced 48-layer NAND last year, but took nearly a year to bring it into wide production. The company will need to hit 64 or 96-layers to hit its intended cost targets, and it might need a die shrink as well. To date, all of Samsung’s 3D NAND has been produced on a 40nm process. Cutting existing prices by a further two-thirds will probably require an aggressive technology rollout. 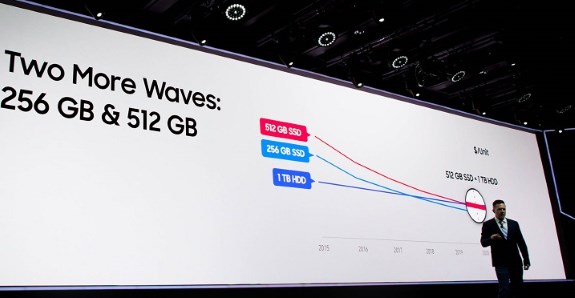