ASRock reveals which of its motherboard support Kaby Lake

The global leading motherboard manufacturer, ASRock, announces that its 100 series motherboards will support Next Generation socket 1151 Intel® Core™ Processors. Via a new BIOS update, ASRock Z170, H170, B150 and H110 series motherboards are resurrected. With only a few clicks, users are able to update the BIOS and enjoy the outstanding performance of next generation Intel® processors.

ASRock provides the latest BIOS not only to those high-end and mainstream motherboards, but also to those entry level ones. From the Z170, H170, B150 series to the H110 series, users may expect more powerful processing speed yet enhanced capabilities by Intel's new processors.

With the latest BIOS, your 100 series motherboard will be more powerful and useful. Be prepared for the overwhelming force of Intel® new socket 1151 CPUs. Hurry to download the new versions of BIOS and drivers from the ASRock website right now!

You can find the list of supporting motherboards (and the required BIOS version) at this page. 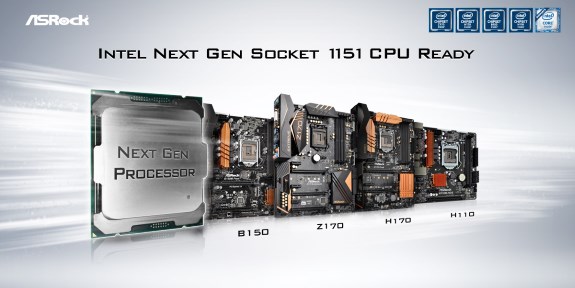