Is this the flying car from Larry Page?

Posted on Monday, Oct 24 2016 @ 16:25 CEST by Thomas De Maesschalck
As I wrote a couple of months ago, Google co-founder Larry Page seems to have a thing for flying cars. A Bloomberg report claims Page invested in several flying car startups, including $100 million for the the Hollister, California based Zee.Aero.

Not a lot is known about the company, it explains on its website that it's working on a "a revolutionary new form of transportation" but is unwilling to provide further details. From what reporters have been able to piece together, Zee.Aero employs over 100 aerospace engineers and is working on an entirely new aircraft to change personal aviation.

Now Silicon Valley got its hands on what may be the first photo of this secretive project. The photo was taken by Steve Eggleston, assistant manager at DK Turbines, an airplane parts company near the Hollister Municipal Airport tarmac. He explains the plane caught everyone's attention because it made a noise strikingly different from the typical roar of a plane:

But it wasn’t only the sound that caught the attention of Eggleston and his co-workers at DK Turbines. It was what the aircraft was doing.

“What the heck’s that?” saleswoman Brittany Rodriguez thought to herself. “It’s just hovering.”

The DK Turbines employees who witnessed the experiments claim they saw the plane hover about 25 feet off the ground, and how it was able to land straight down:

During both Zee.Aero flights witnessed by DK Turbines staff from several hundred yards away in September and October, the aircraft hovered about 25 feet off the ground, and landed rapidly, straight down, according to the witnesses. “My initial thought was it was some kind of experiment,” said Saul Gomez, who works in inventory and sales, and described the hovering craft as white, slightly smaller than a Cessna and “like something out of a movie.”

The photo below isn't really what comes to mind when you think about a flying car, but based on the descriptions from eyewitnesses the craft has pretty awesome capabilities. 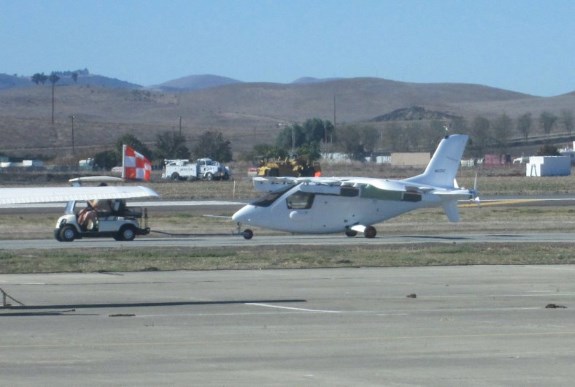