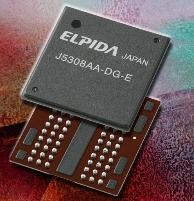 To achieve simultaneous high-speed operation with low-power consumption, Elpida has incorporated "dual-gate" transistor technology. This technology suppresses the leakage current in the DRAM device--an unwanted side effect that occurs when pursuing low-voltage operation while maintaining or improving transistor performance. The "dual-gate" transistor has recently been used for high-performance processors; however, this is its first use within a DRAM device.

In addition to the significant increase in data transfer, the 512 Megabit DDR3 SDRAM device will also provide improved power consumption--1.5 Volt vs. the 1.8 Volt operation that is currently available in DDR2 architecture. A newly introduced automatic calibration feature for the output buffer will enhance the ability to control the system timing budget during variations in voltage and temperature. This feature helps enable robust, high-performance operation--one of the key benefits of DDR3 architecture.

Elpida's 512 Megabit DDR3 SDRAM will also utilize 90nm process technology. Elpida has already established volume production at 90nm which, in turn, will allow production on the newly developed DDR3 devices to be ramped as necessary to satisfy market demand.

The company expects the 512 Megabit DDR3 devices will ship as customer samples by the end of 2005. Initial production is anticipated for 2006 in accordance with market demand. Seems like DDR2 memory may have a real short lifespan.