Posted on Friday, Feb 03 2017 @ 13:21 CET by Thomas De Maesschalck
A study from McKinsey found that the cost of electric car batteries fell by 80 percent since the start of this decade. It seems batteries are on a similar learning curve as solar panels, which also dropped tremendously in price over the last seven years.

Batteries for electric cars cost around $227 per kWh in 2016, down from around $1,000 per kWh in 2010. The study claims pricing is expected to fall under $100 per kWh by 2030 but some automakers are staying ahead of the trend and may maintain a competitive advantage over the competition.

As Electrek points out, Tesla claims the price of its batteries fell under $190 per kWh in early 2016 and hints it can achieve $100 per kWh by 2020. McKinsey sees $100 per kWh as the level required to hit price parity with internal combustion engine cars in the US.

Tesla aims to reduce the price of its batteries by another 30% ahead of the Model 3 with the new 2170 cells in production at the Gigafactory in Nevada.

It should enable a $35,000 price tag for a vehicle with a range of over 200 miles, but McKinsey sees $100/kWh as the target for ” true price parity with ICE vehicles (without incentives)”:

Given current system costs and pricing ability within certain segments, companies that offer EVs face the near-term prospect of losing money with each sale. Under a range of scenarios for future battery cost reductions, cars in the C/D segment in the US might not reach true price parity with ICE vehicles (without incentives) until between 2025 and 2030, when battery pack costs fall below $100/kWh, creating financial headwinds for automakers for the next two to three product cycles. 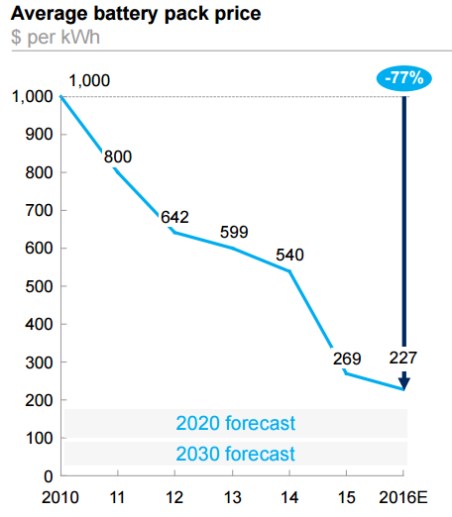