At the SPIE Advanced Lithography conference in San Jose, Dutch semiconductor fab tool maker ASML announced its NXE:3400B. This is the next generation in the company's line of EUV machines, a technique that promises to take chip production to the next level. Extreme ultraviolet (EUV) lithography has faced countless delays and still faces several hurdles but companies like Intel, TSMC, Samsung and GlobalFoundries need it as the currently used immersion lithography has been stretched to its limits.

ASML hopes the NXE:3400B will make it into volume-production fabs, but it appears the production-worthiness is based on a number of assumptions. EE Times has a great article about it over here.

The talks suggested that EUV commercial use is coming into focus. However, with real hurdles still ahead and no announcements of major purchase orders, skeptics still had plenty of breathing room.

The production-worthiness of the new ASML system is based on “a bunch of assumptions” including photo-resist materials effective at light exposures of 20 mJ/cm², said Chris Mack, chief technology officer of Fractilia. The fact is that current resists need 30 mJ/cm², he said.

What’s more, the road map still depends on a variety of other ASML and third-party tools arriving in synch, including pellicles to keep contaminating particles off of EUV wafers. “If the schedules slip a year, we will miss the 5-nm window,” he said.

ASML is shipping the first 3400B this week and most, if not all, of the 14 EUV systems installed in the field are expected to take the upgrade. Each upgrade takes around three months and it's a process that reportedly makes open-heart surgery look easy. 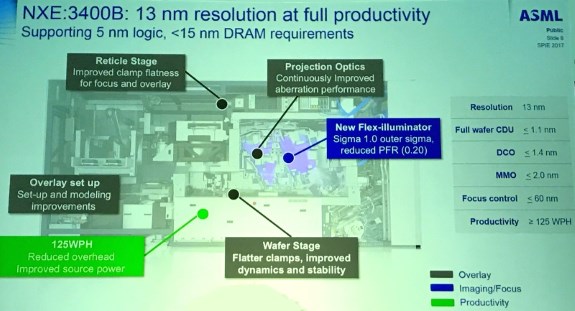