Posted on Thursday, Mar 02 2017 @ 17:46 CET by Thomas De Maesschalck
Sharkoon announced a new budget gaming mouse. Called the SHARK ZONE M52, this is a laser mouse with the Avago ADNS-9800 sensor. It's an ambidextrous mouse that offers up to 8200dpi (adjustable in 100dpi steps), has Omron switches for the left/right mouse buttons, programmable macros, and RGB LED illumination. All this for 36.99EUR. 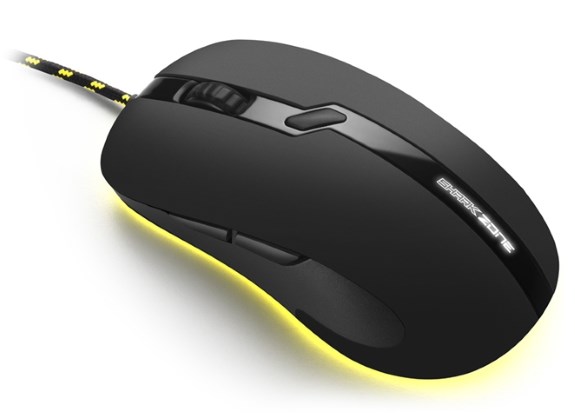 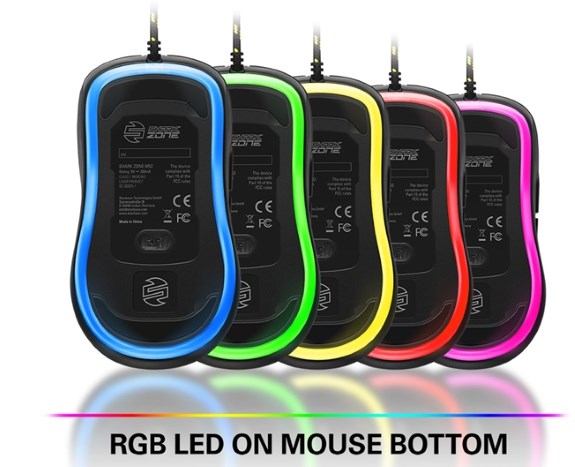 Sharkoon expands their lineup within the SHARK ZONE gaming series and introduces a new laser mouse with an RGB illuminated bottom. The integrated Avago ADNS-9800 laser sensor offers a maximum 8,200 DPI and the sensitivity is individually customizable in 100 DPI increments within the included gaming software.

The Sharkoon SHARK ZONE M52 Gaming Laser Mouse comes in a symmetrical design with a rubber, black surface and eight total programmable buttons. Omron switches in the left and right mouse buttons promise a long operating life cycle of at least 10 million clicks. The Avago ADNS-9800 laser sensor achieves up to 8,200 DPI. Sensitivity can be individually adjusted, by increments of 100 DPI, within the software from 100 DPI up to 8,200 DPI. Four DPI steps are factory preset and are conveniently selected via the DPI switch on the surface. Visually, the DPI steps are displayed through the white illuminated SHARK ZONE logo, in which the brightness changes per selected step. As an optical contrast, the M52 has an RGB illuminated bottom. Within the included gaming software, individual lighting effects can be selected from a total of 32 preset colors. In addition, the brightness can be adjusted in three steps to include pulsating illumination on the bottom.

All buttons on the M52 can be assigned numerous Windows and multimedia commands via the gaming software. This includes programmable macros as well as an X-shot function, which can emulate up to 255 consecutive left clicks after a single click on an assigned key. Also, a delay of up to 255 milliseconds can be set between each X-shot. The 128 kB onboard memory allows up to five individual configurations to be stored, each within a game profile. Unlimited gaming profiles can be configured on the PC and then, when needed, a game profile can be loaded into the onboard memory of the mouse. Practical: For subsequent use of the M52 on another PC, the same configurations are not lost and can be used at any time, even without any software installation.

The lightweight mouse is only 97 grams and connects via the typical SHARK ZONE black-yellow textile braided cable and gold-plated USB plug. Maximum polling rate is 1,000 Hertz; lift-off distance is between one millimeter up to five millimeters.