Microsoft Word gets AI to improve your writing

Posted on Monday, Mar 06 2017 @ 16:23 CET by Thomas De Maesschalck
I never considered Microsoft Word would be a good candidate for an artificial intelligence infusion but the latest Office 365 proves me wrong. Microsoft added a new AI feature that takes spelling and grammar correction to a whole new level.

VentureBeat writer John Brandon reports he's been writing professionally since 2001 and notes this new machine learning feature of Word surprised him so much he abandoned Google Docs in favor of Word. The new "grammar nanny" helps to make your writing better, it understands what you're writing, it alerts you to problems with passive voice and jargon, it flags words you use too commonly, it looks for errors in formal language, and discovers superfluous words:

I’ve been writing professionally since 2001 (around 10,000 published articles now), but I’m still learning, I guess. The new Editor announced today (and available immediately if you select the Fast Insider option within Word under Settings) is like hiring a grammar nanny. The Editor scans all of your prose, alerting you to passive voice and jargon. It can identify words that “express uncertainty” (the suckers, it flagged dozens of instances). For example, in a document that’s 50,000 words (long story on that one, but you should buy it next year), I kept using words like “basically” and “maybe” over and over again. I zapped them because, now that I look back at the text, they add clutter. 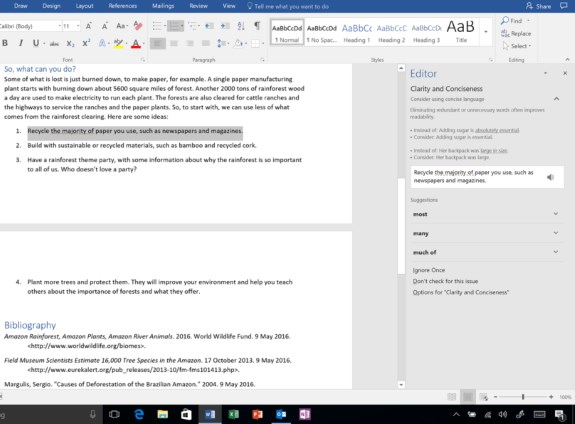