SSD prices to rise throughout 2017 as undersupply situation remains

Posted on Tuesday, Mar 07 2017 @ 18:28 CET by Thomas De Maesschalck
TrendForce released its report about NAND flash memory shipments in Q4 2016. The research firm found that shipment totaled $12.05 billion, up 17.8 percent versus the quarter before. The industry saw a large sequential revenue increase as prices shot up significantly due to a shortage of NAND flash memory. The industry is switching to 3D NAND flash memory and is currently in an undersupply situation as production is not keeping up with high demand.

Analysts estimate prices aren't going down anytime soon as market supply is expected to remain tight throughout 2017. TrendForce writes they believe prices of NAND flash will go up every quarter in 2017.

The table below shows the revenue of the largest NAND flash memory makers. 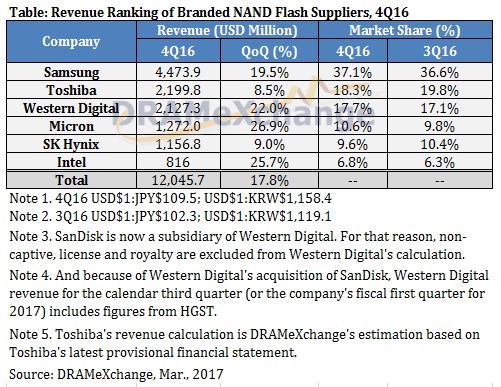 Here's a more detailed break-down from TrendForce that discusses each individual vendor:

Samsung
For the fourth quarter of 2016, Samsung’s NAND Flash business registered a sequential growth of 11~15% for bit shipments and an increase of more than 5% in ASP. These results were attributed to strong demand for high-capacity eMMC, UFS and SSD products. Thus, Samsung’s NAND Flash revenue for the fourth quarter advanced by nearly 20% sequentially.

Samsung continues to be the market leader for high-capacity mobile storage products (i.e. eMMC and UFS) and for SSDs. The company is well ahead of the second-place competitors in terms of market shares and therefore benefits significantly from the recent surge in NAND Flash prices. At the same time, Samsung is using 48-layer 3D-NAND Flash for all its SSD lines.

Looking at Samsung’s production plans, the 2D- to 3D-NAND conversion at the Line 16 facility continues. Line 17 and the plant in Pyeongtaek, South Korea are designated for 3D-NAND production, but they are not expected to make significant contribution to Samsung’s 3D-NAND capacity until after the second quarter of this year. Therefore, bit shipments for this first quarter will fall by around 4~9% compared with the previous quarter. If Samsung’s plans proceed according to schedule, then its NAND Flash bit shipments will again expand after the second quarter.

SK Hynix
In the fourth quarter of 2016, SK Hynix scaled back SSD shipments while increasing eMCP shipments in response to the demand from Chinese smartphone brands. Consequently, the supplier’s bit shipments for the quarter post a slight sequential drop of 3% but its ASP of NAND Flash chips saw a large sequential hike of 14%. On the whole, SK Hynix’s NAND Flash business grew its revenue by 9% sequentially in the fourth quarter, totaling around US$1.16 billion.

Going into the first quarter of 2017, SK Hynix’s NAND Flash bit shipments will also be affected by the transition to 3D-NAND as well as declining smartphone shipments during the period. The supplier’s bit shipments could drop by around 5% sequentially. However, ASP of NAND Flash chips is going to be on a steady rise due to the ongoing market undersupply.

With regard to SK Hynix’s transition to 3D-NAND, the advanced architecture is estimated to account for 10% of the supplier’s bit shipments for the first quarter of 2017. SK Hynix is currently releasing 48-layer products and will also be launching 72-layer products in the second half of this year. By the end of 2017, 3D-NAND products are expected to make up more than 50% of SK Hynix’s NAND Flash output.

Toshiba
Toshiba is presently working on products using 64-layer 3D-NAND Flash and has scheduled formal mass production in the second half of 2017. As Toshiba is still raising the yield of the 64-layer production, the company’s memory business is going to focus on the sales of its 48-layer products during this year’s first half. Overall, the share of 3D-NAND products in Toshiba’s total NAND Flash output remains relatively small. Nonetheless, the supplier is keeping its target of increasing the output share of 3D-NAND to more than 50% by the end of 2017.

Western Digital
NAND Flash revenue for Western Digital’s fiscal second quarter of 2017 rose by about 20% sequentially due to increase in both bit shipments and ASP. Western Digital also continue to perform strongly in the SSD market, indicating that the company’s acquisition of SanDisk has led to an effective integration of HDD and SSD lines.

In terms of product planning, Western Digital has already added its own branded 64-layer 3D-NAND chips into its retail portfolio. Sampling of PC-OEM SSDs based on the same memory technology is also taking place in this first quarter. The share of 3D-NAND products in the supplier’s total NAND Flash output is expected to exceed 50% by the end of 2017.

Micron
As with other suppliers, Micron gained enormously from the tight market supply and the strong overall demand. In the company’s first fiscal quarter of 2017, Micron posted a large sequential increase of 26% for its NAND Flash bit shipments. The supplier’s NAND Flash revenue also grew 27% compared with the previous fiscal quarter to reach around US$1.27 billion.

When Micron’s NAND Flash revenue for its 2017 fiscal first quarter is split according to products, the revenue shares of component base products, mobile products, automotive/industrial products and SSD products are respectively 40%, 23%, 15% and 20%. Revenue share increased for all categories except component base, which saw a decline.

Moreover, Micron has schedule the mass production of its next-generation 64-layer 3D-NAND Flash in the second half of 2017. The share of Micron’s 2D-NAND products in the total NAND Flash output is projected to shrink to about 10% after 2017. Nevertheless, Micron is expected to retain some 2D-NAND production to satisfy the demand for specialty memory products.

Intel
Intel posted a large sequential increase of more than 25% for its NAND Flash bit shipments in the fourth quarter of 2016 because of the high demand for enterprise-grade SSDs. The supplier’s NAND Flash revenue for the quarter also grew 25% sequentially to US$816 million.

With regard to product planning, Intel will gradually scale down the production of its 20nm and 25nm products while increasing the weight of enterprise-grade SSD products based on both 3D-NAND and MLC technologies. These 3D-NAND MLC SSDs can be priced competitively and help Intel improve the overall cost structure and profitability. At the same time, Intel is now starting the mass production of 3D-NAND TLC products.