It wasn't really a long wait since the official announcement but the GeForce GTX 1080 Ti reviews have finally arrived. NVIDIA's latest and greatest will be available in stores worldwide tomorrow, with pricing of $699 (819EUR incl. 19% VAT) for the Founders Edition.

So lets take a look at a couple of reviews to see how NVIDIA's new graphics beast performs. Our first stop is The Tech Report and they conclude the GeForce GTX 1080 Ti is the fastest single-GPU card they've ever tested. The card handles 4K gaming with ultra settings very smoothly and delivers overall 99th-percentile-FPS-per-dollar performance that's 33 percent higher than the GeForce GTX 1080. Basically, you're getting Pascal-based Titan X class performance for $699 instead of $1,299:

Though $700 is a lot to pay for a graphics card, I think the GTX 1080 Ti is fairly priced, too. Its 99th-percentile-FPS-per-dollar result is 33% or so better than the GTX 1080's. With Nvidia's new $500 suggested price tag for those cards, the 1080 Ti is about 40% more expensive in its Founders Edition form than the former king. Considering that we're getting similar performance to what the $1300 Titan X Pascal offered before this point, the GTX 1080 Ti seems like a great value. Of course, a $1300 graphics card makes almost anything seem like a great value.

GPU releases are so fast that it's also worth looking a couple of years back. AnandTech notes the GTX 1080 Ti offers 2.5x the performance of the 3.5-years old GTX 780 Ti:

Speaking of which, it’s now been three-and-a-half years since the GTX 780 Ti launch, and GTX 1080 Ti’s performance shows it. At both 4K and 1440p, NVIDIA’s card offers just over 2.5 times the performance of their Kepler-based powerhouse. Internally, NVIDIA tends to plan for a two to four year upgrade cadence on their video cards, and 2017 is going to be the year they push remaining GTX 700 series owners to upgrade through a combination of product launches like the GTX 1080 Ti and better pricing. If you didn’t already upgrade to a Pascal card last year, then your benefit for waiting a year is 32% better performance for the same price.

A third voice can be heard at PC Perspective, which concludes the GTX 1080 Ti is hands down the best video card in the world. AMD really has nothing that can match NVIDIA in the $300+ video card market but expectations for Vega are high.

AMD needs a flagship Vega graphics card and it needs it yesterday. We are now years into an NVIDIA-only world for cards over $300 being relevant and though NVIDIA deserves credit for not launching the GTX 1080 Ti at $800-900 (really, it could have), competition only makes the market better for consumers. We continue to hear about AMD's plans for 2017 and the promises of HBM2 memory, a high-bandwidth cache controller, and double-packed math. Whether or not they can deliver on those promises has yet to be proven.

If you aren't tired of reading yet, you can also check out the TechPowerUp review but the story doesn't really change. Yes, the GeForce GTX 1080 Ti is a pretty expensive card but it's faster than the almost twice as costly Titan X Pascal and it's insanely fast:

NVIDIA's CEO shocked everyone during the live stream, by announcing a price that matches that of the GTX 1080: $699. While it is certainly not cheap, NVIDIA has trained us well to accept costly graphics cards for the high-end, where the company completely dominates the market. Before you start moaning now, just two weeks ago everybody has been dreaming of a GTX 1080 for their rig - at more than $600. Today the GTX 1080 Ti is available for $699, which is in the same ballpark - pricing is definitely not unreasonable. 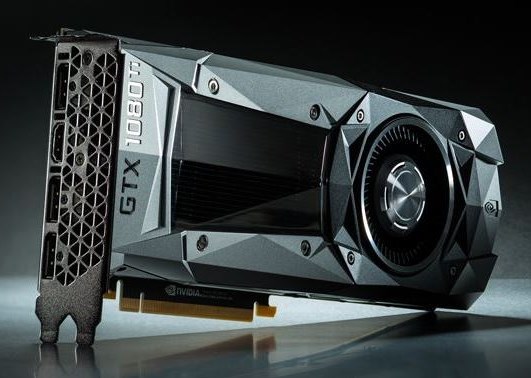