At the OCP Summit 2017, Seagate revealed it's on track to ship 12TB helium-filled enterprise hard disks in the second quarter of this year. This 12TB 3.5" HDD promises the lowest power consumption in the industry and is designed for cloud infrastructure.

Seagate’s new 12TB Enterprise Capacity 3.5 HDD offers the lowest power consumption and lowest weight in the industry. The drive can accommodate 550TB workloads annually and has a mean time between failure of 2.5 million hours. The drive is designed to operate 24/7 for 5 years, making it ideal for even the most rigorous enterprise data center environments.

Key benefits and improvements include: 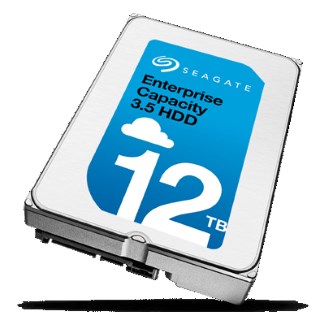 Western Digital revealed a 12TB helium-filled HDD in December 2016 and said it would ship this product in the first half of 2017.