The first two products feature 1GB and 2GB of MRAM, in the future the company will offer versions from 4GB up to 16GB, as well as M.2 and U.2 models. Everspin says its nvNITRO offers 1.5 million random 4K read IOPS and a latency of just 6 microseconds. The company explains its MRAM storage accelerator is ideal to meet the needs of high frequency traders.

Everspin Technologies, Inc., the leading provider of MRAM solutions, today announced its nvNITRO line of storage accelerators which delivers extremely fast read and write times with ultra-low latency. Everspin is introducing initial capacities of 1 Gigabyte and 2 Gigabyte of Spin Torque MRAM today, based on its 256Mb DDR3 ST-MRAM. Capacities from 4 Gigabyte up to 16 Gigabytes will be available later in this year utilizing Everspin’s 1 Gigabit DDR4 ST-MRAM. The nvNITRO ES1GB and ES2GB operate at a blazing 1,500,000 IOPS with 6 microsecond end-to-end latency. They are offered in a half-height, halflength (HHHL) PCIe card with two access modes: NVMe SSD and memory mapped IO (MMIO).

Enterprise storage system designers now have the benefit of memory speed in a storage form factor and protocol. The use of Everspin’s ST-MRAM means that the data is persistent and power fail safe without the need for Supercapacitors or battery backup, saving critical space in storage racks. The high cycle endurance of ST-MRAM also enables unlimited uniform drive writes per day, eliminating the need for complex wear leveling algorithms used in NAND Flash based drives. There is no degradation in read/write performance over time with Everspin’s STMRAM.

This extreme performance, combined with ultra-low and consistent latency, means that demanding applications such as high frequency financial trading systems will be able to count on faster, more predictable transactions. The read/write speed and low latency have value in many storage applications such as database and file system acceleration, on-line transaction processing log caches, and metadata caching/buffering. The need for faster speed across storage networks and within data centers can now be met with the industry’s first all MRAM storage cards that provide both block access storage and byte addressable memory functions on the same platform. The PCIe Gen 3, NVMe interface makes it simple to add this capability to existing storage networks and servers because there is no need for special drivers or operating system changes.

The nvNITRO product is under test at customers now. Initial production is planned for the second quarter of 2017. Everspin will be expanding the nvNITRO line with M.2 and U.2 form factors with capacity options ranging from 512MB to 8GB throughout the year. 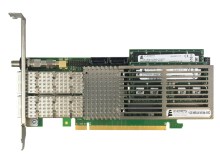