Posted on Wednesday, Mar 29 2017 @ 19:35 CEST by Thomas De Maesschalck
When NVIDIA introduced its GeForce GTX 1080 Ti, the company promised we'd soon get updated Pascal-based cards with faster memory. ASUS seems to be the first company to live up to this claim as the firm just announced a new GTX 1080 STRIX and a new GeForce GTX 1060 STRIX. The new GTX 1080 STRIX OC features 11GB GDDR5X memory clocked at 11GHz while the GTX 1060 STRIX OC offers 6GB GDDR5 memory clocked at 9GHz.

Each model is clocked 1GHz higher than its predecessor and has a new SKU to differentiate it from the older models.

The two cards use revised GDDR5X and GDDR5 memory chips that can sustain their memory chips thanks to improvements in the memory controller end by NVIDIA. At 11 Gbps, the GTX 1080 now has a memory bandwidth of 352 GB/s, while the GTX 1060 has 216 GB/s bandwidth with 9 Gbps memory over its 192-bit wide memory bus. The new GTX 1080 STRIX OC also comes with "max-contact" heatsink base the company introduced with its GTX 1080 Ti STRIX. The company didn't reveal pricing. 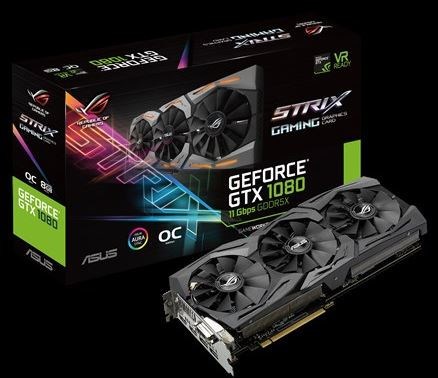