Posted on Monday, Apr 03 2017 @ 15:58 CEST by Thomas De Maesschalck
Asian tech site BenchLife got its hands on details about the Intel Optane SSD 900P, an upcoming product for the desktop and workstation market. So far we've only seen a server version and a low-capacity 16/32GB cache memory model for the desktop market, but this model will reportedly ship in 280GB, 480GB, 960GB and 1.5TB capacities.

The specification sheet reveals the SSD offers up to 550k random 4K read IOPS, up to 500K random 4k write IOPS, up to 2.5GB/s read speeds and up to 2.0GB/s write speed. Models will be available as a PCIe card as well as a 2.5" disk with U.2. Power consumption is listed as up to 18W under load and 5W in idle.

Pricing and availability remains a mystery. 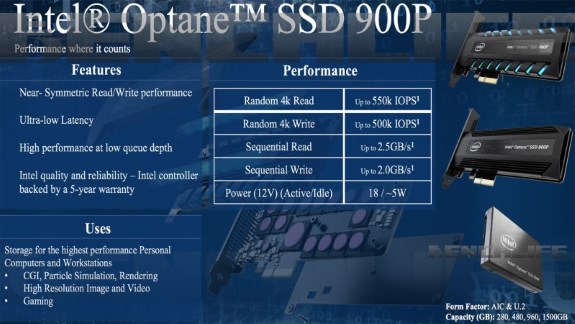