Posted on Thursday, Apr 06 2017 @ 13:56 CEST by Thomas De Maesschalck
EK Waterblocks updated its product portfolio with a full-cover waterblock for the GeForce GTX 1080 Ti video card. Blocks with nickel or acetal+nickel design will be available via the company's webshop on April 12 for 119.95EUR. The company will also offer backplates, a black version will retail for 29.95EUR while a nickel variant will command a price of 37.95EUR.

The base of the block is made of nickel-plated electrolytic copper while the top is made of a high-quality acrylic material or POM Acetal material (depending on the variant). The top material does not affect the block performance in any way. The acrylic (Plexi) top also features two pre-drilled slots for 3mm LED diodes.

There is no performance difference between the two variants.
The block also features a special plastic cover over the block Terminal. This add-on is designed to reveal the graphics card model, visible from the side. EK also encloses a single-slot I/O bracket which replaces the original two-slot in order to make installation of multiple graphics cards easier and also transforms the GPU into a gorgeous single slot solution. 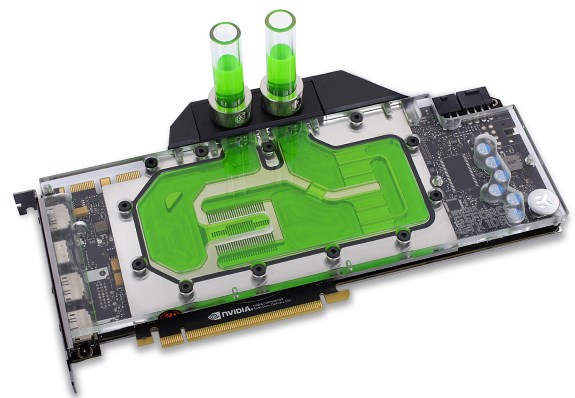