Posted on Monday, Apr 10 2017 @ 12:43 CEST by Thomas De Maesschalck
A new rumor originating from BenchLife indicates the next HEDT processors from Intel may arrive sooner than expected. Earlier this year the rumors pointed to a launch around Gamescom in the final weeks of August. Now BenchLife claims the original launch date was the 31st week of the year (July 31 - August 6) and that current roadmaps from Intel talk about a launch in the 25th week of this year, which is June 19-25.

The date for qualification samples production has not changed and it’s still 22nd week (May 29th – June 4th), which is interpreted by Bench.Life as an indication of a possible showcase at Computex, which starts on the same week (May 30th – June 3rd).

Older leaks reveal the upcoming Basin Falls-X platform will consist of quad-core Kaby Lake-X and six to ten-core Skylake-X processors. These will require a new motherboard with the X299 chipset. Some speculate the earlier release of these chips may be a reaction to the launch of AMD's Ryzen. 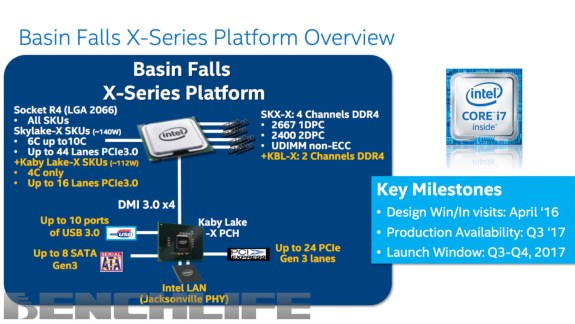