Posted on Tuesday, April 11 2017 @ 14:01 CEST by Thomas De Maesschalck
Biostar announces the A320MH PRO and A320MD PRO, two new A320 based Micro-ATX motherboards for the AMD Socket AM4 platform. Both Ryzen motherboards are priced at just $59, the main difference between the two is that the A320MH PRO has one HDMI port whereas the A320MD PRO lacks that but offers a DVI-D port.

BIOSTAR is thrilled to present the latest addition to its AM4 product line-up with the debut of the 2nd-generation of the highly-acclaimed BIOSTAR PRO Series motherboards. The new BIOSTAR A320 PRO series features new and improved features that focus on reliability, stability whilst providing top-of-the-line performance. The 2nd-generation PRO Series motherboards featuring A320 chipset supports AMD RYZEN CPU and upcoming APUs for the AM4 socket. The board will support up to DDR4-2667 memory up to 32GB in capacity.

BIOSTAR’s PRO Series of motherboards are products aimed at consumers who want the absolute best value and with incredible price-to-performance ratio. Now on its 2nd-generation, the BIOSTAR PRO Series now packs improved performance as well as the classic stability, endurance and value that the series is known for. The 2nd-gen BIOSTAR PRO Series boards featured an enhanced power design that ensures stability and durability for secure, long-term usage. Backed with a metal retention backplate, this improves board integrity and makes it free from deformation made from large coolers. Nichicon high-end audio capacitors also make the 2nd-gen BIOSTAR PRO series boards a great choice for entertainment offering improved audio over competing models by offering superb sound quality for a great listening experience. 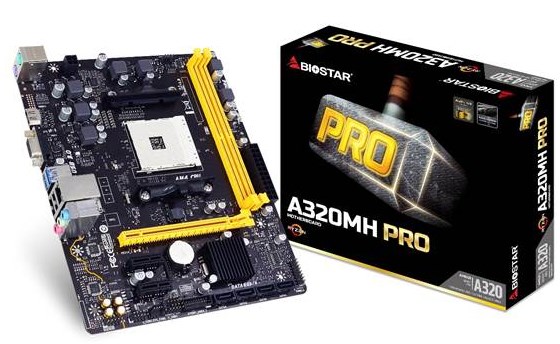