Last week Google revealed it developed its Tensor Processor Unit (TPU) because the chip can do machine learning tasks much faster and with lower power consumption than processors from Intel or GPUs from NVIDIA.

When attacked, NVIDIA isn't the sort of company to sit back, especially as artificial intelligence is becoming the company's new bread and butter. At the company's blog, CEO Jen-Hsun Huang penned down a new article and argues the results look better if you compare the TPU versus the current-generation Pascal-based P40.

Despite the updated comparison, the Google TPU is still almost twice as fast as the Pascal-based Tesla card and it also requires just a quarter of the power. However, one interesting caveat is that the TPU is exclusively aimed at inference, whereas the Tesla card is also designed to be used for training.

While Google and NVIDIA chose different development paths, there were several themes common to both our approaches. Specifically: 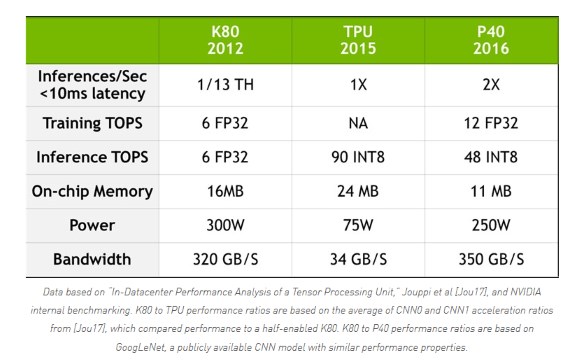