Posted on Wednesday, Apr 12 2017 @ 14:06 CEST by Thomas De Maesschalck
ASUS added two new Intel B250 based motherboards to its lineup, this includes the micro-ATX sided STRIX B250G Gaming and the ATX-sized STRIX B250H Gaming. With AMD having a B350 chipset this is getting a bit confusing so for absolute clarity I'll repeat that these are LGA1151 motherboards for the Intel platform. Both motherboards have M.2 storage slots and support the new Intel Optane memory. You can check the full specifications over here. Shipments are expected later this month, the B250G is expected for around 99EUR whereas the B250H should cost 129EUR. 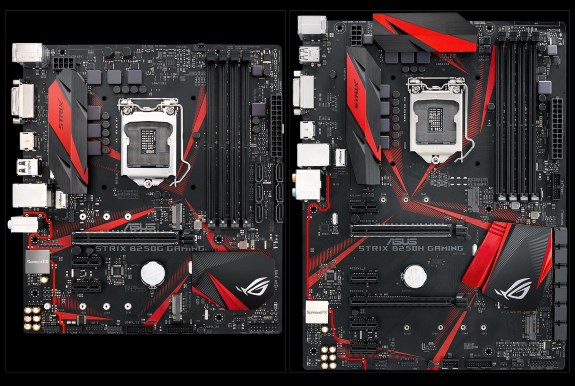 The ROG family of gaming motherboards is expanding to welcome two new members: the Strix B250G Gaming and Strix B250H Gaming. As their names imply, both are based on Intel’s B250 chipset for 7th Generation Core processors, otherwise known as Kaby Lake. They’re affordably priced, so you can invest more in a faster GPU, yet they still retain the critical features you need for your build.

ATX and microATX flavors
To serve different system sizes, the new boards come in different form factors. The Strix B250G Gaming has a compact microATX footprint, while the B250H conforms to the larger ATX standard. The additional real estate lets the Strix B250H Gaming squeeze in more expansion slots, and we’ve added a few more features that aren’t found on its smaller sibling.

Modern graphics cards are getting heavier as GPU coolers incorporate more metal. This puts strain on the PCI Express slot, so we’ve fortified the primary x16s on both boards. Our SafeSlot technology incorporates metal reinforcements into the walls of the slot and secures it to the board with additional solder points. This treatment reduces the potential for damage due to clumsy handling, and it helps protect the motherboard when shipping systems or transporting them to LAN parties.

The Strix B250H Gaming incorporates a secondary PCIe x16 slot, but it’s limited to four lanes of bandwidth and doesn’t feature the full SafeSlot package. Although two-way CrossFireX configurations are supported, the bandwidth is insufficient for SLI certification. As you’d expect, the B250H also has more PCIe x1 slots than the B250G. The integrated peripherals on both boards are good enough that few will need to resort to extra expansion cards.

Fully loaded memory and storage
Form-factor differences don’t affect the onboard memory and storage. Each board has four DDR4 memory slots that can take up to 64GB of RAM, which is more than enough for gamers and even power users. You also get a full complement of SATA ports for 2.5” SSDs and mechanical hard drives.

M.2 drives dominate the storage discussion these days, and the brothers Strix are well-equipped there as well. Both have dual M.2 slots with four lanes of PCIe 3.0 bandwidth primed for the latest NVMe SSDs. One of the M.2 slots supports Intel’s new Optane Memory, which provides an ultra-fast cache that can give hard drives SSD-like load times and responsiveness. The other slot supports SATA-based M.2 drives to ensure broad compatibility with a wide range of storage devices.

External storage is covered by a collection of USB 3.0 and 2.0 ports. Dual internal USB 3.0 headers provide plenty of connectivity for cases with front-panel ports; each one supplies dual ports, allowing up to four SuperSpeed jacks to live up front.

Game-ready audio and networking
ROG’s integrated audio is good enough that there’s no need for a discrete sound card. The Strix B250G Gaming and its B250H counterpart both feature our latest SupremeFX S1220A codec along with multiple Texas Instruments operational amplifiers. This combination produces an impressive 120-dB signal-to-noise ratio for the output, ensuring low-distortion playback that keeps you focused on your game. The 113-dB SNR for the line input improves recording quality, so streamers can communicate clearly with their audiences.

Along with extra networking software, the bigger board adds audio perks. It comes with Sonic Studio III software that can map audio sources to different outputs for balancing simultaneous gaming and multimedia playback across headsets and speakers. You also get Sonic Radar III, which maps in-game audio on a visual HUD that provides a cheeky advantage over your foes.