Posted on Thursday, Apr 13 2017 @ 15:10 CEST by Thomas De Maesschalck
Slides from the AMD Radeon RX 500 series launch leaked a week early, they reveal the specifications of the upcoming Radeon RX 550, 560, 570 and 580 video cards. The slides confirm the RX 500 lineup is manufactured on a 3rd generation 14nm FinFET process. Some performance indications are offered by the slides but keep in mind AMD is using the R9 380X, R7 370 and R7 360 as a comparison base.

Here's a quick look at the specification: You can check out the rest of the slides at VideoCardz. 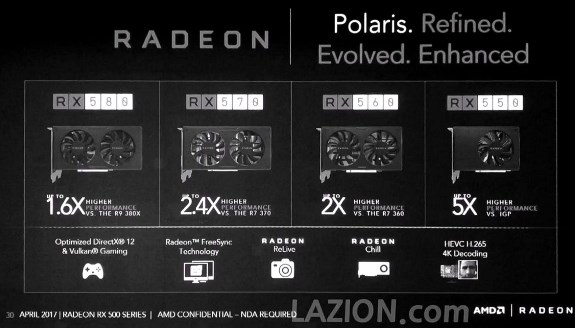