NASA discovers Enceladus has all ingredients to support life

Posted on Friday, Apr 14 2017 @ 11:28 CEST by Thomas De Maesschalck
NASA announced they've discovered evidence of ample hydrogen gas being produced by hydrothermal activity on the seafloor of Saturn's moon Enceladus. This is relevant because it provides a form of chemical energy source that could support life. Thanks to this finding, scientists are now reasonably sure that Enceladus has all primary ingredients required for the formation of life.

The paper from researchers with the Cassini mission, published in the journal Science, indicates hydrogen gas, which could potentially provide a chemical energy source for life, is pouring into the subsurface ocean of Enceladus from hydrothermal activity on the seafloor.

The presence of ample hydrogen in the moon's ocean means that microbes – if any exist there – could use it to obtain energy by combining the hydrogen with carbon dioxide dissolved in the water. This chemical reaction, known as "methanogenesis" because it produces methane as a byproduct, is at the root of the tree of life on Earth, and could even have been critical to the origin of life on our planet.

Life as we know it requires three primary ingredients: liquid water; a source of energy for metabolism; and the right chemical ingredients, primarily carbon, hydrogen, nitrogen, oxygen, phosphorus and sulfur. With this finding, Cassini has shown that Enceladus – a small, icy moon a billion miles farther from the sun than Earth – has nearly all of these ingredients for habitability. Cassini has not yet shown phosphorus and sulfur are present in the ocean, but scientists suspect them to be, since the rocky core of Enceladus is thought to be chemically similar to meteorites that contain the two elements.

"Confirmation that the chemical energy for life exists within the ocean of a small moon of Saturn is an important milestone in our search for habitable worlds beyond Earth," said Linda Spilker, Cassini project scientist at NASA’s Jet Propulsion Laboratory (JPL) in Pasadena, California. 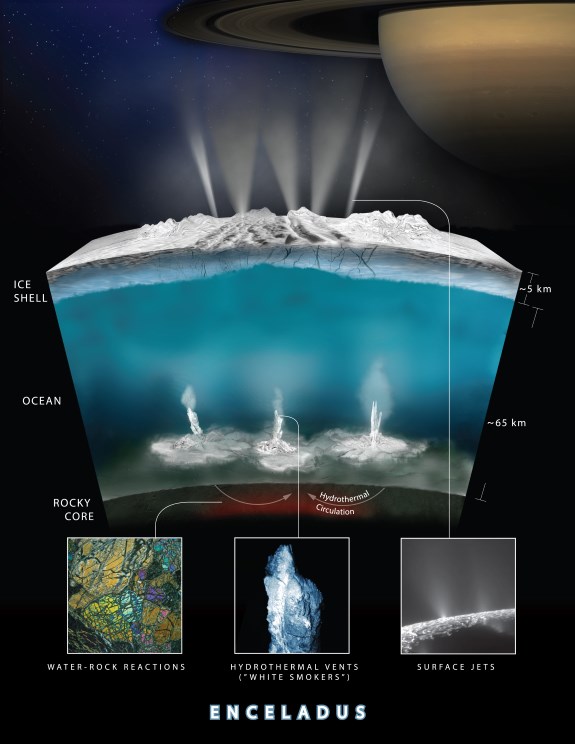 On one hand the discovery could mean there's chemosynthetic microbial life on Enceladus, but on the other hand scientists are skeptic. ARS Technica quotes NASA astrobiologist Mary Voytek, who says the concentration of hydrogen detected by the Cassini probe was so high it suggests there's nothing in the moon's oceans consuming it:

As to which ocean offers the best prospects for life, NASA astrobiologist Voytek said she would still bet on Europa. That Cassini found such high concentrations of hydrogen in the plumes of Enceladus may well mean that there is nothing in the moon's oceans consuming it. There is also evidence that Enceladus could be considerably younger than the moons of Jupiter, giving life less time to form there. "My money for the moment is still on Europa, but it could be on any of these moons," she said. "It would be great if life were on all of them.