Posted on Tuesday, Apr 18 2017 @ 18:48 CEST by Thomas De Maesschalck
ASUS announces a bunch of Radeon RX 500 series video cards, including new ROG STRIX models. The new AMD flagship model in the ASUS lineup is the ROG STRIX RX 580, this card uses a 2.5-slot cooler and has a core clockspeed of up to 1431MHz in OC Mode.

Rather than reprising the cooler from the previous generation, the ROG Strix RX 580 series uses the latest design we introduced with the Strix GTX 1080 Ti. At 2.5 slots wide, this monster dissipates heat across 40% more surface area than the old 2-slot cooler. The copper slug that sits on top of the GPU is also machined with much tighter tolerances to improve thermal transfer. Dubbed MaxContact, this precision-crafted surface is 10X flatter than traditional heat spreaders.

Better cooling lets us take the Radeon RX 580 to the top—literally. The lineup is capped by the Strix RX 580 Top, whose GPU boosts up to an impressive 1431MHz in OC mode and 1411MHz in Gaming mode. 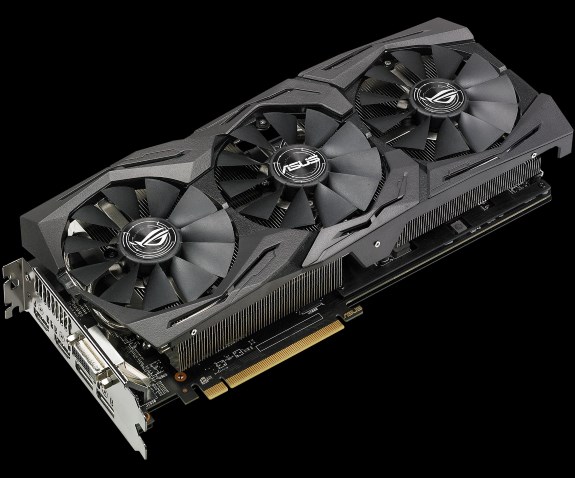 There are also a couple of other models like the STRIX RX 570, the Dual Radeon RX 580 and the Expedition RX 570. You can view these cards at the ASUS ROG site.