Samsung close to overtaking Intel in terms of chip revenue

Posted on Tuesday, May 02 2017 @ 14:32 CEST by Thomas De Maesschalck
Market research firm IC Insights points out that Samsung will soon be world's largest chip maker, thereby dethroning the dominant number one position Intel has held since 1993. One year ago, Samsung's chip business was still about 30 percent smaller than Intel but big increases in DRAM and NAND pricing has skyrocketed Samsung's revenue.

Samsung, the industry leader in memory chip sales, is benefiting from a precipitous rise in average selling prices (ASPs) for DRAM and NAND flash. According to IC Insights, DRAM ASPs in the first quarter of this year were 45 percent greater than in the first quarter of 2016, while NAND ASPs increased 40 percent over the same period.

If Intel's second quarter sales come in around the midpoint of the company's guidance, about $14.4 billion, Samsung could unseat Intel in the second quarter with a modest yet typical increase of 7.5 percent in chip sales from $13.9 billion in the first quarter, IC Insights noted.

Analysts believe this will likely be a one year event as Samsung's revenue is expected to decline again once DRAM and NAND pricing goes back to normal. 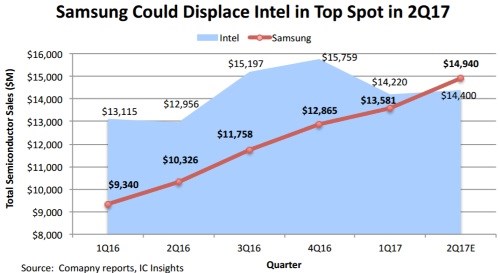