AMD to hype up Vega, Navi and Zen+ at May 16 event

Next week AMD will be hosting its Financial Analyst Day. At this May 16 event, the company is expected to bang the drums about its upcoming GPU and CPU architectures.

WCCF Tech claims sources close to AMD confided that the company will reveal more details about not only the close-to-be-released Vega but also the long-term CPU and GPU roadmaps. This will include a bit more information about the future Navi GPU as well as the second-generation Zen+ architecture (aka Pinnacle Ridge).

Navi is AMD’s third generation graphics architecture designed under the umbrella of the Radeon Technologies Group. The graphics architecture will build on the power efficiency principals of Polaris & Vega. Navi is believed to be the first GPU microarchitecture conceived entirely under graphics guru Raja Koduri. It will employ “next gen” memory, likely third generation stacked High Bandwidth Memory or GDDR6 depending on the product to boost performance and efficiency.

Do note that this will NOT be the Vega launch event as this event is aimed at financial analysts and investors. The launch date of Vega remains a mystery, it could be towards the end of May at an event near Computex, or perhaps at the E3 conference towards mid-June. We'll update you as soon as more information is available.

On a related note, AMD's stock price has still not recovered from last week's earnings sledgehammer and is now trading around the $10 mark. FYI, NVIDIA's financial results will be posted tomorrow after the market's closing bell. 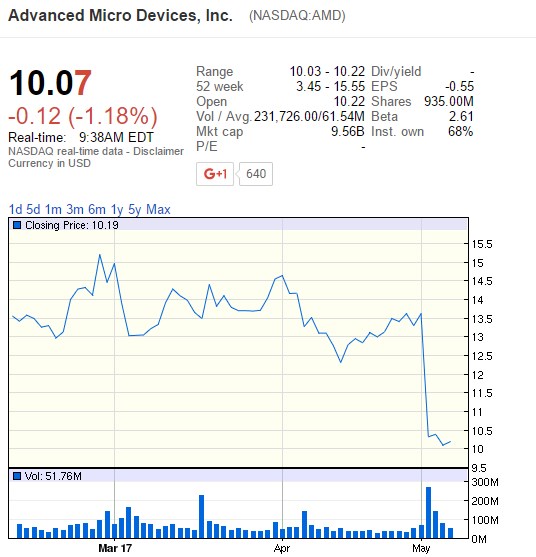