Posted on Thursday, Jun 01 2017 @ 14:20 CEST by Thomas De Maesschalck
Qualcomm is touting its new Snapdragon 835 with Windows 10 support at Computex. As revealed about half a year ago, there's a new generation of ARM SoCs coming up that will be able to run Windows 10 and that will execute legacy software via emulation.

Of course, this isn't for people who need to run demanding software or games but for basic software like Office it seems to work really well. Qualcomm envisions a new class of "always connected" laptops with smartphone-like features.

Devices with the 10nm Snapdragon 835 are expected later this year, they will offer 1 Gigabit LTE connectivity and promise up to 50 percent longer battery. Additionally, Qualcomm claims these systems can offer up to 4 to 5 times the connected standby as what's possible with Intel's Kaby Lake processors.

Office 2016 that we've seen is a 32 bit version emulated, but despite the emulation it worked really well. We’ve seen a demo of an Excel data set, creating a chart and then copying it to a PowerPoint presentation. After that, the presentation was sent via email using Outlook.

We had a chance to see 7 Zip (x86) third party app, installing and working just fine. The Edge browser runs smoothly and the demo was conducted via a GigabitLTE (test network), the heart of the Snapdragon 835. The average download speed exceeded 300 Mbps - something that you might end up seeing in the future. 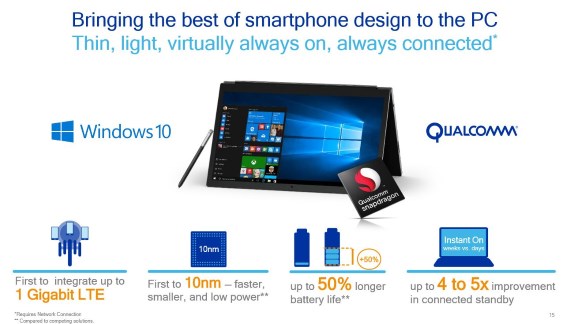