Posted on Friday, Jun 16 2017 @ 11:31 CEST by Thomas De Maesschalck
As was revealed a couple of weeks ago, the consumer versions of AMD's Vega will launch in July but the company will be launching a special Frontier Edition on June 27. This card is designed for engineers and data scientists and carries a hefty premium versus the expected pricing of the gaming models.

We still don't know the specifics about the Vega gaming cards but today we can tell you the pricing of the Frontier Edition. The first webshops have the cards in stock and are asking $1,199 for the air cooled Radeon Vega Frontier Edition and $1,799 for the liquid cooled model.

The Frontier Edition features 64 CUs, 4086 stream processors, a 1600MHz maximum core clockspeed, 16GB HBM2 with a memory bandwidth of 483GB/s and FP32 computing power of 13.1 teraflops. According to the leaked information, the air cooled version has a 300W TDP while the liquid-cooled model cranks it up to 375W.

Next month we can expect the gaming versions, these will be cheaper and should have better gaming performance than the Frontier Editions. 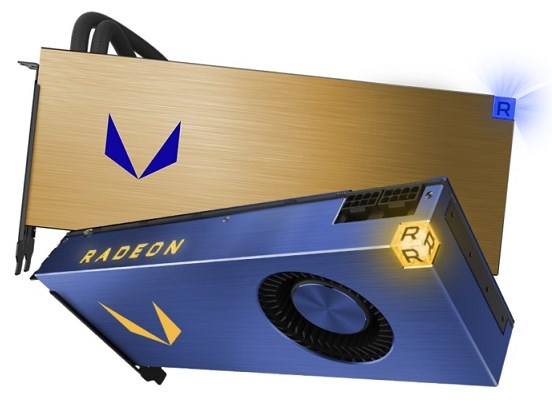 Additionally, there's also a table from Exxact that provides some information about the professional performance of the Radeon Vega Frontier Edition versus the NVIDIA Titan XP (Pascal)