Posted on Wednesday, Jun 21 2017 @ 12:44 CEST by Thomas De Maesschalck
At yesterday's EPYC launch event, AMD reiterated that its Zen 2 and Zen 3 parts will be made on a 7nm series process. The company just rolled out its 14nm "Naples" architecture and if things go well it plans to roll out the Zen 2 architecture sometime next year. Zen 2 is intended for a 7nm process and is codenamed "Rome". Last week we wrote GlobalFoundries plans to offer 7nm production in 2018.

About one year after that AMD intends to release "Milan", this will be the third-generation Zen server architecture and it will be made on a 7nm+ process. 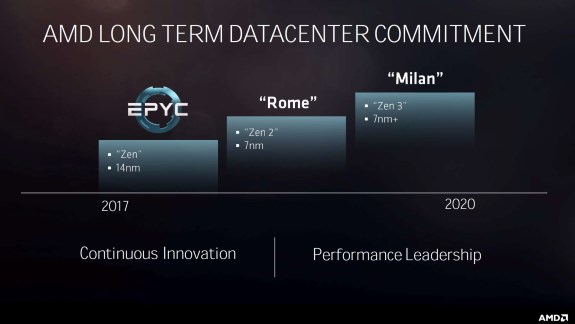