Posted on Wednesday, Jun 21 2017 @ 14:10 CEST by Thomas De Maesschalck
Together with the launch of the EPYC server processors, AMD also revealed more details about its Radeon Instinct accelerators for machine learning applications. The most interesting part perhaps is the Radeon Instinct MI25, this model features the Vega GPU whereas the other two cards in the Instinct lineup are Fiji and Polaris based.

The Instinct MI25 uses the PCI Express 3.0 x16 interface and features 64 CUs, 4096 stream processors and 16GB HBM2 with a memory bandwidth of 484GB/s. AMD did not mention clockspeeds but the teraflops figures reveal the card is a bit slower than the Frontier Edition.

The Radeon Instinct MI25 has a dual-slot design, is passively cooled and has a 300W TDP. Shipments start in Q3 2017. 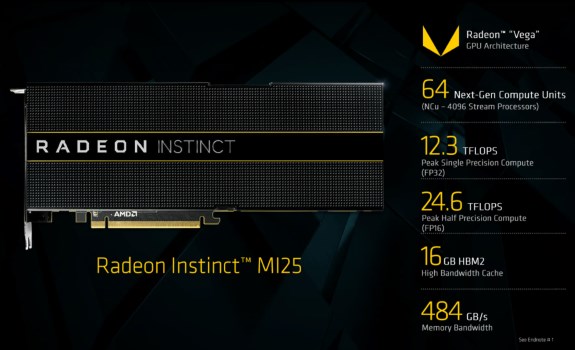 For comparison, you can find the specification of NVIDIA's Volta-based Tesla V100 PCIe card over here.