Overclock3D delivers news that AMD's Radeon RX Vega GPU will feature DirectX 12 level 12_1 support. The currently available Polaris GPUs are limited to level 12_0 and the biggest difference will be the addition of rasterizer-ordered views and conservative rasterization. NVIDIA's Pascal GPUs already supported these features but AMD's new Vega will deliver a higher-level implementation of the conservative rasterization as well as a couple of other enhancements.

One other feature that AMD has implemented is support for lower minimum precision levels with DirectX 12, which will allow AMD to utilise 16-bit floating point precision calculation. This is a new feature that is currently present in the PS4 Pro, though it is unclear whether or not we will see this feature used by games in the near future. 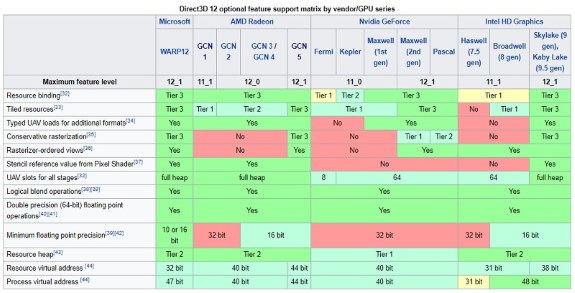