PC Perspective has tested the liquid cooled version of the AMD Radeon Vega Frontier Edition. It's still no Radeon RX Vega but it's the closest thing available right now to get a glimpse of the possible gaming performance of the Radeon RX Vega.

The site concludes the watercooled Frontier comes within a couple of percentage points versus the GeForce GTX 1080 in most tests. With the card's core hitting 1600MHz more consistently, it offers better performance than the air cooled version, which often dips to 1400MHz and below.

However, the AMD Radeon Vega Frontier Edition 16GB Liquid-Cooled is an extremely power hungry card. At stock settings, PC Perspective discovered the card alone draws a whopping 350W, quite a bit more than the 280W consumed by the air-cooled Frontier Edition. For comparison, the NVIDIA GeForce GTX 1080 draws just 180W.

PC Perspective also tested what happens when you overclock the card to keep the Vega GPU at 1600MHz throughout testing. In this case, the card consumes over 440W of power. Still two weeks to go until the RX Vega arrives! 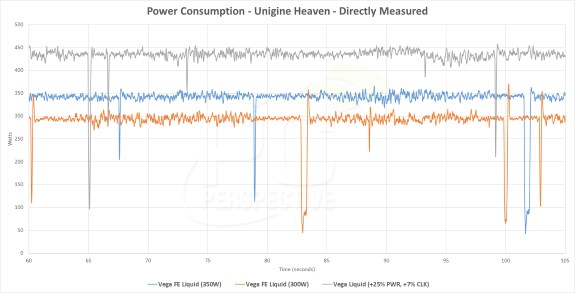