TechSpot spend a lot of time to investigate whether the Core i7-7800X from Intel offers any benefits for gamers. The short answer is that for gamers, the new Skylake-X lineup doesn't stack up well versus the cheaper Kaby Lake processors.

The Core i7-7700K was faster in almost all of the 30 gaming benchmarks the site ran. The 7700K was on average 11 percent faster than the 7800X in terms of minimum frame rate and even an overclocked 7800X at 4.7GHz couldn't match the performance of the stock 7700K. Additionally, the 7800X also uses 35 percent more power in idle and about 6 percent more in games.

As TechSpot suggests, the problem here may be the new cache design of Skylake-X. It is more suited for server tasks but less efficient for gaming.

That doesn't really explain why the 7800X was just flat out slow by comparison for quite a few of the games tested. The likely reason for this is down to Intel restructuring the cache hierarchy. Compared to the 7700K, the 7800X has quadrupled the L2 cache per core while the shared L3 has been reduced by just over 30% per core. It's believed these changes combined with the way this new cache works makes Skylake-X more suited for server-related tasks and less efficient when it comes to things such as gaming, and that's certainly what we're seeing here. 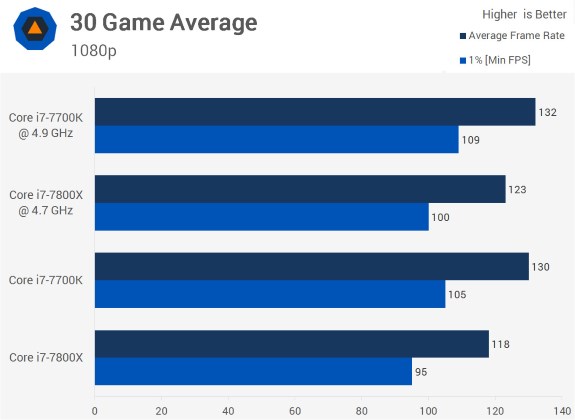