Posted on Thursday, Jul 20 2017 @ 14:49 CEST by Thomas De Maesschalck
Elon Musk largely confirmed rumors that SpaceX has changed its technology roadmap and is no longer planning to send an uncrewed "Red Dragon" mission to Mars in 2020. Up until February 2017, the private space launch company intended to send its Red Dragon capsule to Mars in 2018 to test the supersonic retro-propulsion technologies needed to land astronauts and heavy equipment on Mars.

In February, SpaceX delayed the mission to Summer 2020 and now Musk reveals there's been a big change of plans. Propulsive landings were one of the major features of the Dragon spacecraft but SpaceX is no longer pursuing this approach.

"The reason we decided not to pursue that heavily is that it would have taken a tremendous amount of effort to qualify that for safety for crew transport," Musk explained Wednesday. "There was a time when I thought the Dragon approach to landing on Mars, where you've got a base heat shield and side mounted thrusters, would be the right way to land on Mars. But now I'm pretty confident that is not the right way." Further Reading

Musk added that his company has come up with a "far better" approach to landing on Mars that will be incorporated into the next iteration of the company's proposed Mars transportation hardware. Musk laid out an initial version of this "Interplanetary Transport System" in 2016, but he has said an updated architecture is coming soon, perhaps at the 2017 International Astronautical Conference in Adelaide, Australia. The event will be held from September 25 to 29. 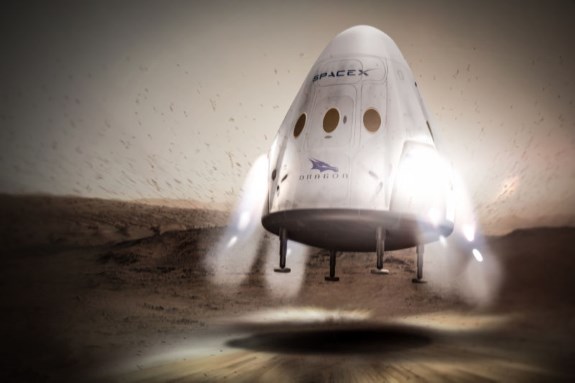