After the recent cryptocurrency crash, some small miners have reportedly quit but major miners are expected to stay in the market. Gigabyte thinks its GPU shipments will decline about 10 percent sequentially in Q3 2017 due to lower demand from miners.

As for July, some market watchers expect MSI's graphics card and motherboard shipments to drop from June, but will return to growth in August and September. Its notebook shipments in the third quarter are expected to grow 25-30% sequentially because of seasonality.

Meanwhile, Gigabyte is taking a conservative attitude about the third quarter and expects its motherboard shipments to grow only 5-10% sequentially lacking new products to stimulate demand. Gigabyte also expects its graphics card shipments to decrease by over 10% sequentially in the third quarter as the mining trend will start to cool off and impact demand.

Here's a look at the recent Ethereum market action: 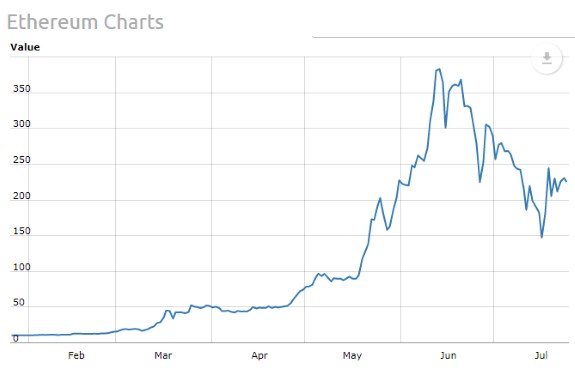