AMD: Gamers can not feel difference between Radeon RX Vega and GeForce GTX 1080

In the past, hardware journalists labored through countless hours of benchmarking to analyze which video card offers the best performance. Now there's a new wind blowing through the industry as AMD is trying to convince everyone that benchmarks aren't that important and that subjective tests are the real deal...

Both systems featured the AMD Ryzen 7 1800X processor and 16GB DDR4 memory. One system used the NVIDIA GeForce GTX 1080 video card with the IPS-based ASUS PG34 G-Sync screen while the other system used an unspecified Radeon RX Vega card with the VA-based ASUS MX34Q FreeSync display. AMD says they adjusted the monitor settings as much as possible to mask the differences between the VA and IPS panel.

At the event, AMD said the NVIDIA-based system was about $300 more expensive than the AMD rig. In his blog article, Tungler reveals the G-Sync display costs $300 more than its FreeSync counterpart. This suggests the Radeon RX Vega model used for the blind test will cost roughly the same as the GeForce GTX 1080.

Gamers were allowed to play one game for just two minutes on each system and had the opportunity to cast a vote about which system felt smoother. AMD claims most gamers preferred the Radeon RX Vega + FreeSync combo, but notes gamers "said the differences were minimal and couldn’t really tell the difference."

AMD suggests the same would take place if they did a blind test against a GeForce GTX 1080 Ti (like HardOCP did last week):

Even if we pitted Radeon RX Vega against the mightier GeForce 1080Ti, my money would still bet on a similar outcome: that you wouldn’t really be able to tell the difference with variable refresh rate. And I believe no gamer should ever consider buying a monitor that isn’t capable of variable refresh rate.

The official RX Vega reveal will follow tomorrow at SIGGRAPH. AMD pretty much derailed the Vega hype train with these cherry-picked "non-inferiority tests" so it will be interesting to see how it's priced and how it performance in objective tests. At the moment, odds are high that tomorrow's event will be a paperlaunch as there's no evidence reviewers have received review samples from AMD. There's also zero word about the review NDA expiry date so either AMD is doing a fantastic job to keep everything under wraps or the cards aren't ready yet. 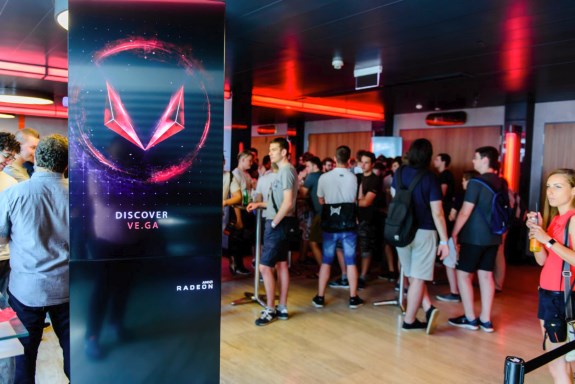